ZX Spectrum gaming on RetroPie in a pub...

ZX Spectrum gaming on RetroPie in a pub...

On the last Thursday of the month, I have a regular retrogaming event at a town centre pub in Wellingborough, Northamptonshire, where we gather round my Raspberry Pi (running RetroPie), armed with four wireless PlayStation-style controllers and play a load of old games on the big screen.

Typically, we play the types of game that are very much aimed for casual players and are quick to understand. It's mostly arcade games running under MAME - The Simpsons; Golden Axe; Double Dragon; Pac Man; Space Invaders and Teenage Mutant Ninja Turtles are firm favourites. We do try to pick multiplayer games to get as many people involved as possible. Hence, running the SNES Bomberman games is always a popular choice (and is a factor behind The Simpsons and Teenage Mutant Ninja Turtles on MAME being popular), as is N64's Mario Kart.

Other popular things tend to be the Sega Mega Drive, especially the Streets Of Rage games, and Crash Bandicoot on the PlayStation (1).

Anyway, I've spent a while trying to iron out some bugs with the PlayStation-style controllers/RetroPie. The controllers sometimes flip between each other. I seem to have remedied this by moving from my Raspberry Pi 3, to 4, and finding a RetroPie 4 image loaded with many arcade/console ROMs which are all thoroughly legitimate. I've also decided to use a real PlayStation 3 controller as the player 1 device, the overall controller for the system.

Anyway, pleasingly, this set-up lets me add in ZX Spectrum TZX files. I've been experimenting with a few games that were sitting in my downloads folder... 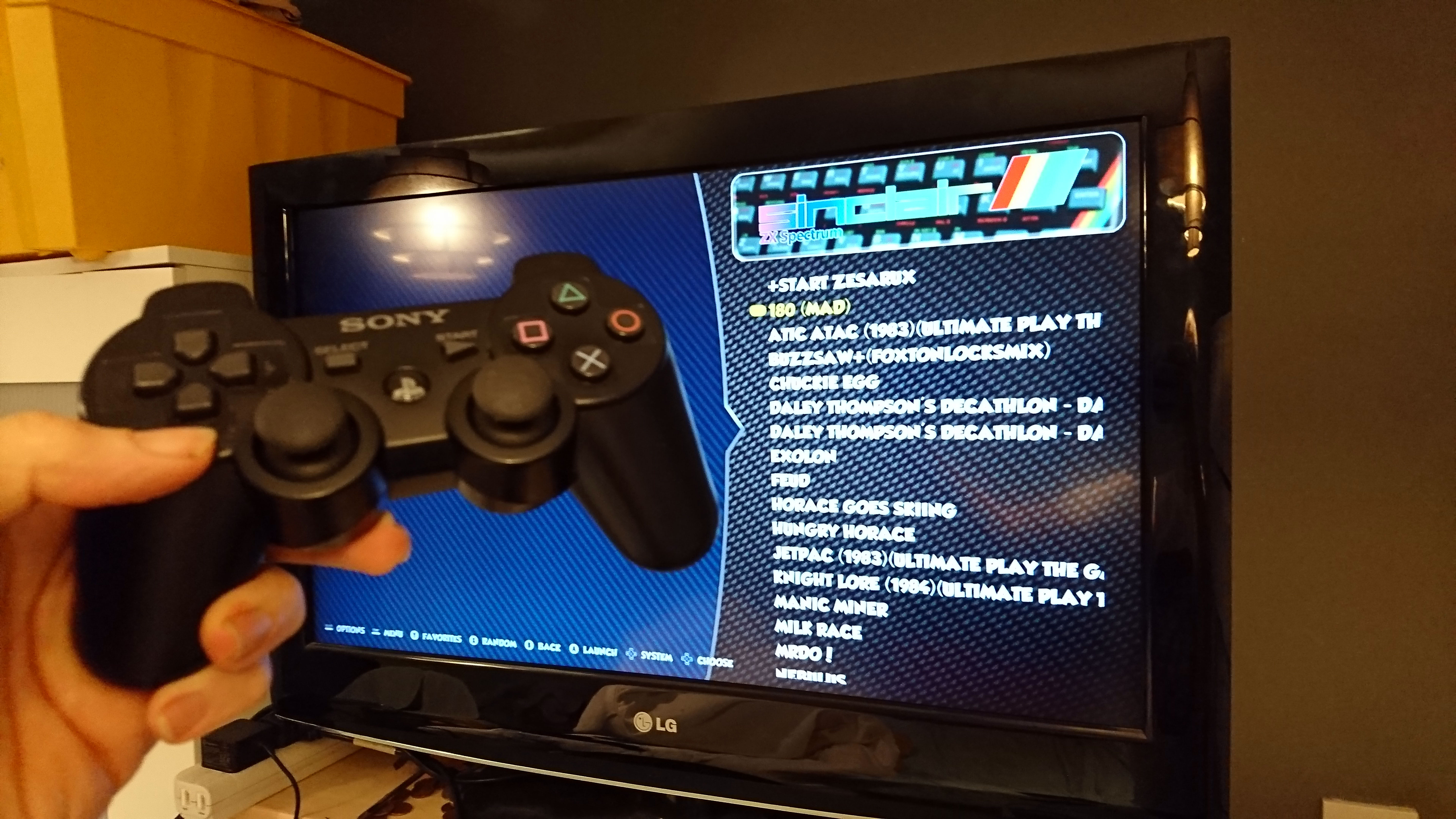 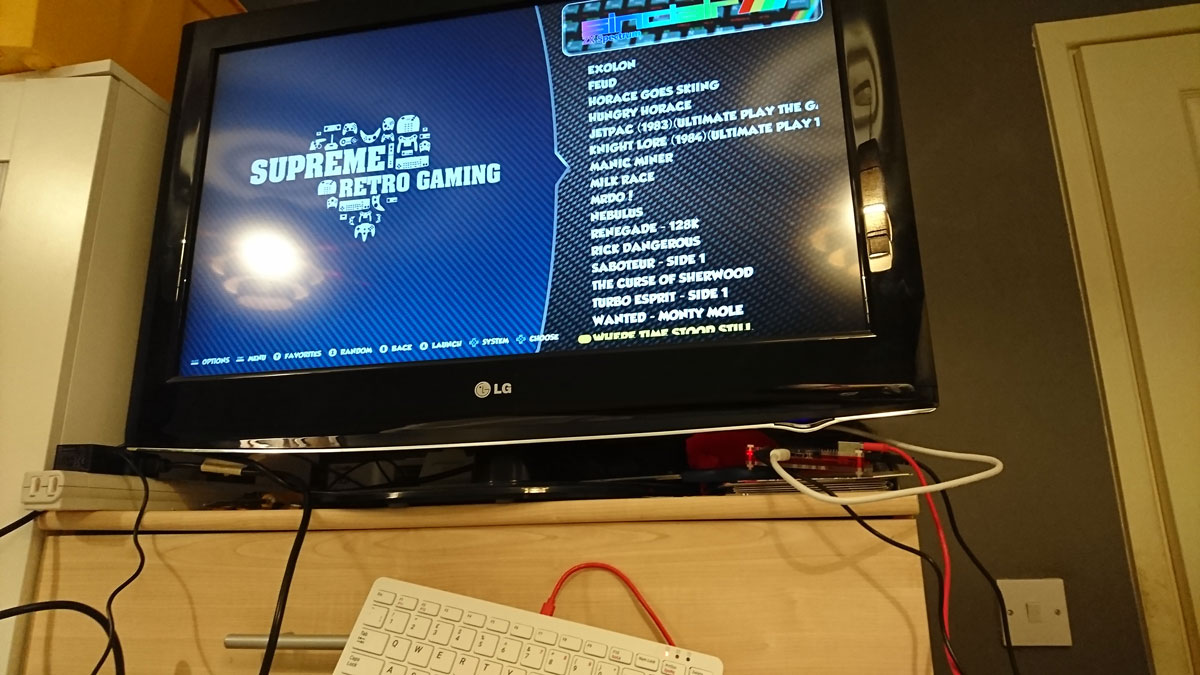 And, unlike RetroPie 3, I've been able to successfully map Spectrum keys to the directions and buttons on the controllers.

This means I have a console-like experience for the ZX Spectrum. Now, there is an obvious downside. The ZX Spectrum is not and was never a console. Some games - some very good games indeed - just can't be mapped to a PlayStation-style controller, you'll always need a keyboard to cover some aspects. A notable example being Chaos - my favourite game of all time - which requires pretty much the alphabet being available to you for the choice of spells.

Now, I have a keyboard hooked up to the Raspberry Pi, so this isn't a problem for me at home. However, when you're trying to put on a retrogaming experience in a pub that's very casual and centred around 'instant appeal', you need to avoid that kind of thing. There's no point putting on Chaos, even if there was a way to get all of it accessible through the controller. Similarly, text adventures like Blizzard Pass, they're not going to work in that environment. It's also why I avoid the masses of Japan-centric RPGs available in the Nintendo/Sega areas.

Each ZX Spectrum game I add in needs unique attention. I have to set the key mapping options in RetroArch's lr-fuse core for each title, opting for whatever the controls are as soon as the game is loaded, just so it can be quickly played without having to jump through any 'redefine keys' faff.

Annoyingly, the simplistic QAOP[space] set-up isn't as prolific as a default as I originally expected. Things like Renegade's QAKL[space] and JetPac's 1 ZX1 are not really intuitive. I've got there, though. All the games listed in the photos can be played via the PlayStation controller with very little hassle. I've mapped the L1, R1, L2 and R2 keys as 1, 2, 3, 4 respectively, and with any extra fire buttons, they tend to be 5 and upwards. (A few games need you type in a number, such as the skill level for Chuckie Egg and Saboteur.)

I also threw in a couple of Amstrad CPC games, which also run perfectly well. Alas, whatever core it is RetroArch is using, it doesn't allow unique controller mapping, you have to make do with it emulating the Amstrad joystick. This isn't a heavy problem, as many Amstrad games were very much centred around the joystick, unlike the Spectrum. It does become an issue in some places. Many Amstrad disk images are sourced from cracked pirated games, which come with a custom cheat introduction, so you're faced with "INFINITE LIVES Y/N?", which means keyboard input. Gah. 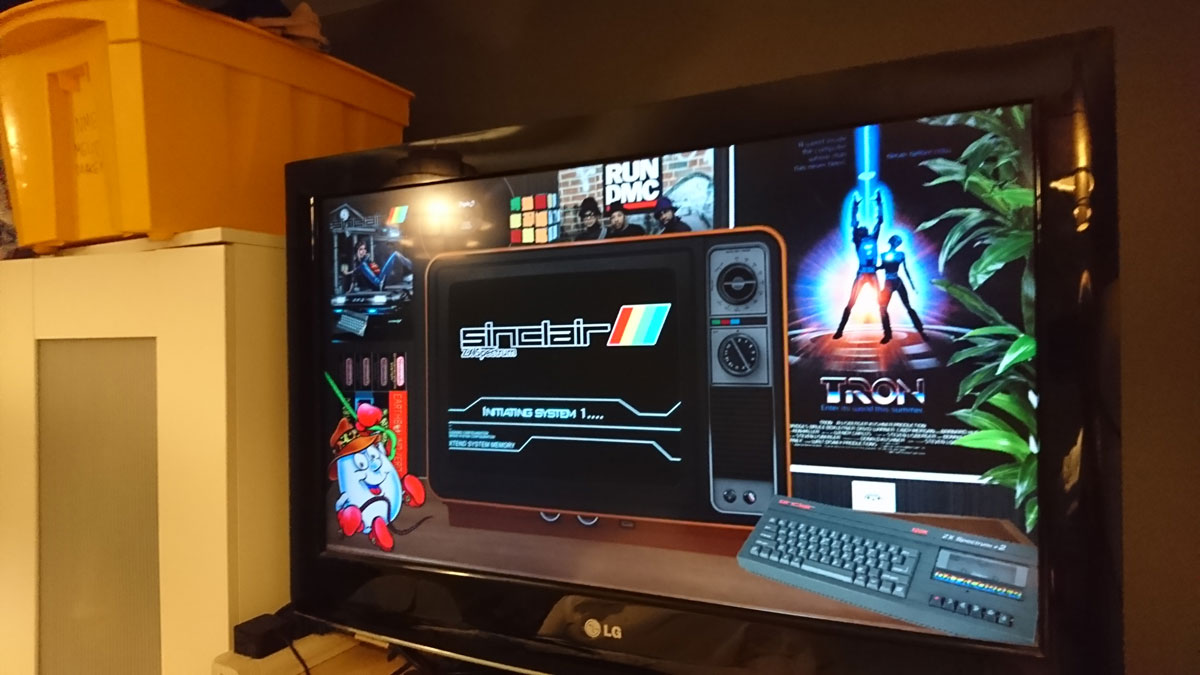 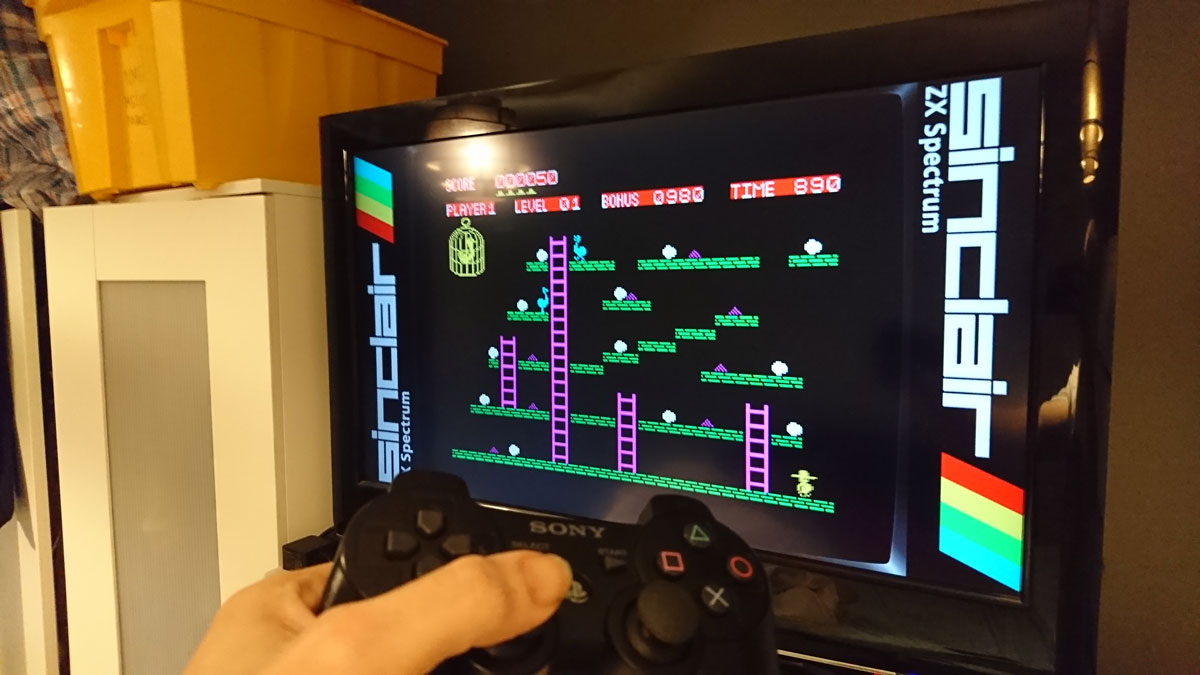 Anyway, I've tried to make this whole thing as console-like as I can, and so, the ZX Spectrum will debut (albeit emulated) at the Olde England from 8pm Thurs 27th February in Silver Street, Wellingborough (almost next door to where retrogaming-centric second-hand games store Software Seller used to be).

Would you guys like to make any suggestions on Speccy games I could add? Something really intuitive, quick and impressive? (Multiplayer would be a lovely bonus.) Cheers...
2 x
Reheated Pixels - a combination of retrogaming, comedy and factual musing, is here now!
Episode 1: Out Run on the ZX Spectrum 48, 128 and other machines
Top

Great stuff Pete, wish I was a bit nearer as I'd certainly be up for attending. Glad to find another MAME user that owns all the ROMS legally, like I do. I mean, what are the chances..?
2 x
Top

Heh, I don't have ALL of them!

The problem with complete (or near-complete) romsets is that you end up having to scroll through an enormous amount of utter guff. I once had a very huge set of MAME roms, and the bulk of them were just LCD displays for fruit machines! Absolutely useless for any retrogamer, come to think of it, I don't think they're much use to gamblers. At a push, maybe it's something for someone rebuilding a vintage fruit machine? I've no interest in the gambling stuff!

I'm fairly happy to find recommended RetroPie images on torrents. They'll have all the popular games, nearly all of them will run in the right aspect ratio and things like that, you barely have to get into the settings to fiddle about.

And yeah, your beloved obscurities may not be on there, but in the 128GB image I'm using just about everything is for arcade and consoles. I've only had to add in 3 more arcade ROMs, and two of those were 4-player versions of existing games.
0 x
Reheated Pixels - a combination of retrogaming, comedy and factual musing, is here now!
Episode 1: Out Run on the ZX Spectrum 48, 128 and other machines
Top

I think Splat, Stop The Express and Xeno (2 player) would be good pub games. Also I don't see Deathchase in those photos - surely get that on there!

Also maybe Wheelie, Bounder and Rapscallion. The last one might seem a bit thinky at first but it's not really all that thinky, plus it's bright and colourful.
1 x
Top

May I suggest my game, Extruder in 2 player mode?

NOTE: I know there is no scoring system yet, but you can still play head to head.
1 x
Top

NOTE: I know there is no scoring system yet, but you can still play head to head.

Cheers, I've just thrown that over onto my Raspberry Pi. It's like inverted Tetris mixed with Bust-a-Move. It could go down well.
0 x
Reheated Pixels - a combination of retrogaming, comedy and factual musing, is here now!
Episode 1: Out Run on the ZX Spectrum 48, 128 and other machines
Top

NOTE: I know there is no scoring system yet, but you can still play head to head.

I remember this well, a very clever main menu text render routine as well as some fantastic gameplay.
1 x
Top

You can now check how it is done, since the source code is available online

You can also see a presentation about Extruder development.
0 x
Top

You can now check how it is done, since the source code is available online

You can also see a presentation about Extruder development.

I remember your development thread being one of the first things that piqued my interest on here back in November '17.

I then stuck about!
1 x
Top

Motos is a great pick up and play 2 player game, that should definitely be on your pub games list
0 x
Top
Post Reply
15 posts