I'm very sorry Morkin, I didn't realise Kosmic Kanga was that bad. I think I'd even prefer Manic Miner!

...Well, I tried to warn people, it's all on you lot, the same thing happened during that WoS Mutan Zone fiasco, we were warned but nobody listened then either and look what happened.

...@RWAC can I just say I don't want to take the mickey out of my fellow players' scores, but 450 is *pretty* bad. I started a new game and scored 480 without actually pressing any control keys. I can only assume that you had your eyes shut whilst playing... 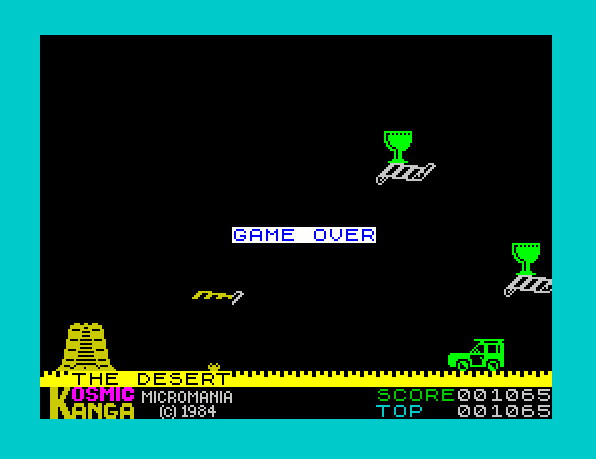 I'm glad a few people have taken to Kosmic Kanga, but more people seem to hate it! I had no idea it would be such a controversial choice but I guess you can see it from the reviews at the time.

Crash gave it 88% and a Crash Smash: "A new, lively and well implemented game, playable and addictive, good value for money, highly recommended."

Sinclair User, though gave it 5/10: "Nice graphics, shame about the game."

SU also said this, which seems to be echoed in comments here: "Controlling the kangaroo is rather haphazard and consequently zapping anything becomes a matter of luck as well as skill."

See, I don't feel that at all. I very rarely die over something that wasn't completely my fault and I find Kanga's movement quite predictable.

My tactic is to hold 'down' to do little hops along the bottom. I try to take out the cars/jeeps/crabs first. That's the only element of luck - you have to wait for Kanga to fire a low shot to get them. If you're unlucky, you won't get one and will need to go for Plan B. You need to keep an escape route in mind, like hopping on to a ledge and not leave it too late as it might require 2 bounces to get height.

Having sorted out the cars, I do bigger bounces to take out flying things, get items, or hop onto platforms over the bombs. The first bigger bounce will get the low planes, and you can build up height to get the high flying planes, although I often let them go. You can always press 'down' to stop Kanga jumping higher than you want so I tend not to jump onto the ledge when picking up items, but just touch them and come down.

I hope that it 'clicks' for a few people and they start to enjoy it. @akeley really captured what I love about it.
0 x
Top

Kosmic Kanga: 935 - I think I'm starting to see how to play this, you need to work out what to shoot and what to avoid and leave yourself room. Still a crappy score though. 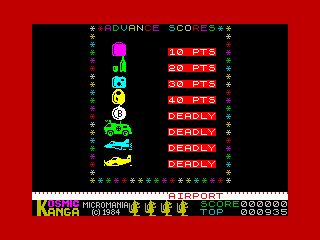 GreenCard wrote: ↑
Tue Sep 15, 2020 10:08 am
For me, a game of pinball consists of using the flippers to frenziedly flail at the ball which, seemingly unavoidably, always seems to end up going down one of the outlanes.

I should've read the instructions. I didn't know you could shoot, not that it really helps me much.

I just scored 930 on "KfK" by starting the game and holding the fire button down (without pressing anything else)...