The person selling toys was completely unrelated to the youtuber.

And as far as anyone knows, Andrews never actually provided any documented evidence that he had aquired the rights to Horace by the routes he claimed. Harrassing people who don't have the means to defend themselves, co-ercing them into signing something to say they recognise the claimant's IP, is classic 'patent troll' behaviour. They think that a portfolio of brow-beaten cases somehow substantiates their own dubious claims.

Also it seems anyone can apply to have a logo or word registered as a 'trademark', regardless of whether you actually own any related IP. No-one checks or seeks verification. Again, someone would have to go to court to get it overturned (as in the case of Tim Langdell trying to claim anything with the word 'edge' in it was his property).

As for paying to download 60MB to play a 16K game that was derivative, unplayable rubbish in its original form? Thanks, I'll pass.
2 x
Joefish

toot_toot wrote: ↑
Mon Sep 14, 2020 10:36 am
There was more to that issue than Andrews just issuing a takedown due to it being "sexualised". They were selling homemade Horace soft toys, Andrews asked them to donate a portion of the profits to charity, they refused, so he issued a takedown notice and I presume the only option was the "sexualisation" of the IP. I'm sure there was different sides to the story, but I think they did resolve it anyway. As far as I know he hasn't issued any takedowns on any home-brew games involving Horace, although there was a Horace game that the developer did change the character because of the whole IP sexualisation issue.

"Donate to charity" seems reasonable, but I'm just not a fan of IP hogging overall, something Subvert seems to specialise in. That might be an issue for another thread though.

It'd be different if these were original devs who are still doing something with their creations, but that very seldom happens. Most of nostalgia-based follow ups (such as this one is gearing to be) end up being quick'n cheap soulless cash-in jobs, by 3rd parties who have little or nothing to do with the original people. I'd rather they did not appear at all than in this "monetizing" manner.
1 x
Top

Did anyone think that Andrews's hoovering up of abandoned trademarks, and supposed acquisition of copyrights was anything other than a cynical retro market cash grab? I thought that was obvious from the beginning

2 x
My rubbish website including the redrawn Amstrad schematics and the Sinclair FAQ wiki.
Top

Not completely unrelated, but they're two different people and a completely separate business.
0 x
My rubbish website including the redrawn Amstrad schematics and the Sinclair FAQ wiki.
Top

I refuse to touch anything to do with Paul Andrews due to his harassment of the YouTuber. Also, his version of events regarding the soft toy manufacturer (who I know in real life) is heavily disputed. And after all that, he still associated with a plagiarising 'author' of many many retrogaming books that were copy-and-paste jobs filled with massive inaccuracies.

This means not getting theC64 (which is a terrible emubox anyway) and not bothering with Antstream (not fussed at all about it, it's a bit glitchy according to YouTube reviews).

The Horace games were somewhat iconic as they appeared so early in the Spectrum's life and were so ubiquitous, but let's be honest, they're all very duff versions of existing arcade games anyway. Impressive for a few hours in 1982 when there's no competition, but please, it's no Manic Miner or Chuckie Egg.
0 x
Reheated Pixels - a combination of retrogaming, comedy and factual musing, is here now!
8pm Tuesday 25th Aug: A Speccy-centric look at Mastertronic's 180, live!
Top

Antstream's another one. Nostalgia-as-a-service for a recurring subscription ugh.
2 x
My rubbish website including the redrawn Amstrad schematics and the Sinclair FAQ wiki.
Top

Also interesting to note, Pixel Games UK, the company behind this port is, of course, owned by Andrews but it has also recently changed the name to Melbourne House Games LTD. 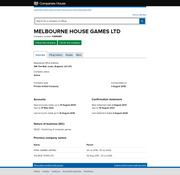 But what I really, REALLY want to know is why the Horace cover is using a purple-blue C64 palette instead of the pure and pristine RGB blue of the Speccy?
0 x
Top

Andrews went straight in with two copyright strikes against the youtuber, which is generally considered the nuclear option as it's "do as I say or your whole channel and any income from it is toast, permanently". He didn't reach out beforehand either to settle it peacefully, just went for it guns blazing.

For which he got mercilessly pummelled and deservedly so. I'd be very surprised if he makes any significant amounts of cash from his Horace grab after all that went on.
2 x
Top

ZXDunny wrote: ↑
Thu Sep 17, 2020 12:23 am
For which he got mercilessly pummelled and deservedly so. I'd be very surprised if he makes any significant amounts of cash from his Horace grab after all that went on.

99.9% of Steam people won't know about this connection.

I doubt he will make any big bucks anyway on a mediocre game with nostalgia factor close to nil for most of general Steam customers. But he has a lot of these IPs and many little trickles probably do amount to something. It's just a pity it's all so dire and soulless.
2 x
Top
Post Reply
25 posts