The community forum for all ZX Spectrum users
https://spectrumcomputing.co.uk/forums/

by R-Tape
It's that time of year, and it came to mind, so I loaded up Kweepa's Advent Calendar.

I'm still not sure what everything is. Besides the obvious, I can see the Christmas zen master, Saturn and several amorphous blobs.

An isometric adventure that seems cool, big graphics. You're Benton, the butler in a mansion when things dissapear. Detective & mistery-novel style.

Now I'm trying to lookk for a dissapearing teapot through the mansion, but an annoying monster is always impeding my way.

@pavero , this game needs a map!

Yep, but I still waiting for RZX firstly.

by Juan F. Ramirez
Cowboy Kidz by Byte back.

An interesting find. Similar to Desperado/Gunsmoke, worse graphics but a cool feature: You always ride around a running train while baddies try to shoot you. Sometimes the train can be either a 'shield' or a problem. I like it!

by WIWC
I've started to play The House on the Tor, a 1990's text adventure by Zenobi Software.
It's pretty playable, with no Sudden Death Syndrome, in fact, with no death at all until now.
It's a mystery concerning a house that your uncle left you. No elfs nor trolls.

by Juan F. Ramirez
Backpackers Guide to the Universe by Fantasy Software.

If you love exploring, this is your game. The third in a series (The Pyramid, Doomsday Castle, BGTTU) starring Ziggy.

by WIWC
What did Bob Pape do after the miraculous R-Type conversion? Another horizontal space shoot'em up conversion of a Irem coin-op: Dragon Breed [Activision, 1990]. Not spectacular as R-Type but still a high level effort. Damn hard though.

by Alone Coder
As far as I remember, there was a combo in The Running Man to turn yourself into a dog. But I've never seen it in walkthroughs. Am I mistaken?

by WIWC
ST. DRAGON [Storm, 1990]
As in Dragon Breed, released the same year, you control a sort of dragon which can use its tail as a shield or as a lethal weapon, while shooting at myriads of nasties in a horizontally scrolling enviroment. It was a Crash Smash. Pretty tough too.

by WIWC
Hammerfist [Activision, 1990]
Never understood back in the day how this peculiar sci fi game works, but now that I know, looks like I can't stop playing it (played it for hours last night). After all, it was a Crash Smash (95%), a Sinclair User Classic (92%) and a TGM Star Player too (92%). 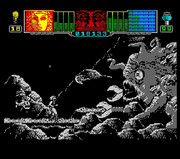