I really like the humour, setting, originality and graphics of Urban Upstart, but I was put off by the Spectrum 2.0 reviews that said the engine was too slow. It deserves a proper go, even if it involves pressing the turbo button in the emulator a lot, or playing at a higher MHz.
0 x
My 'good' Speccy games
All projects I've been involved in, including Crap Game Comp entries
Top

BTW another nice little adventure I decided to try is Trixie's Quest (https://spectrumcomputing.co.uk/index.p ... 6&id=10950), a charming adventure by Arthur Simmons that uses Quill with no graphics.
It is short but quite challenging, due to the use of some very specific commands. Fortunately there is a walk-though available that helps with the more obtuse ones. 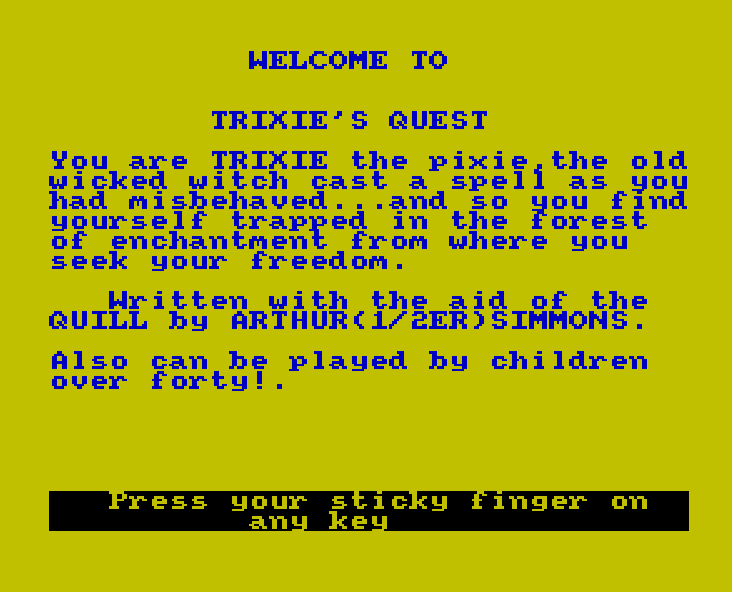 Interesting enough the game has no release year.
0 x
Top

A bit of a howler this one, but there is a twinkle of a decent game here. Keys OP, A-duck, Spc-Jump. At first, it seems impossible to get into the castle (and occasionally it is), but you get used to it. Then you enter the castle and nick all the items while the dragon fires at you. Then back to screen 1.

That's it. Two screens repeated at increasing difficulty. I first hoped there were a lot more screens and was reminiscent of hunchback.

While none of the reviews are good, some of them seem generous. Your Spectrum magazine was the most honest:


Dragonfire has got about as much future as the feudal system.

A real contender for Turkey of the Year Award

How they ever managed to write this code in such a way that you need 48K to run it, I'll never know.

Dragonfire has got about as much future as the feudal system.

Lol..this is why I love the old mags

I think I played this recently in Atari 2600 High score club. I thought it unbelieveably tedious but it seems to be big in Atariland.

Having said that, it's still better than the pointless (albeit beautiful), 0-gameplay castle minigame from Defender Of The Crown...
0 x
Top

Suitable game of the day: Gerry the Germ by Firebird.

That's a depressing omen Juan! Gerry the Germ is impossible!

Has anyone actually managed to collect the oxygen bottle on screen 1? None of the magazine reviewers seems to have managed it.

From Charles Bystram, the author of Brian Bloodaxe, Psycho City and Wulfan the Barbarian, another cool isometric advventure.
1 x
Top

An old, cute gem from 1982. Find an axe in a 3D labyrinth and escape! Different levels of difficulty.
0 x
Top
Post Reply
405 posts