Been a bit of a gap since my previous two posts - took a while to get through this one.

Issue 3 was the first of these magazines that I actually owned, so I'd an idea about what was to come. 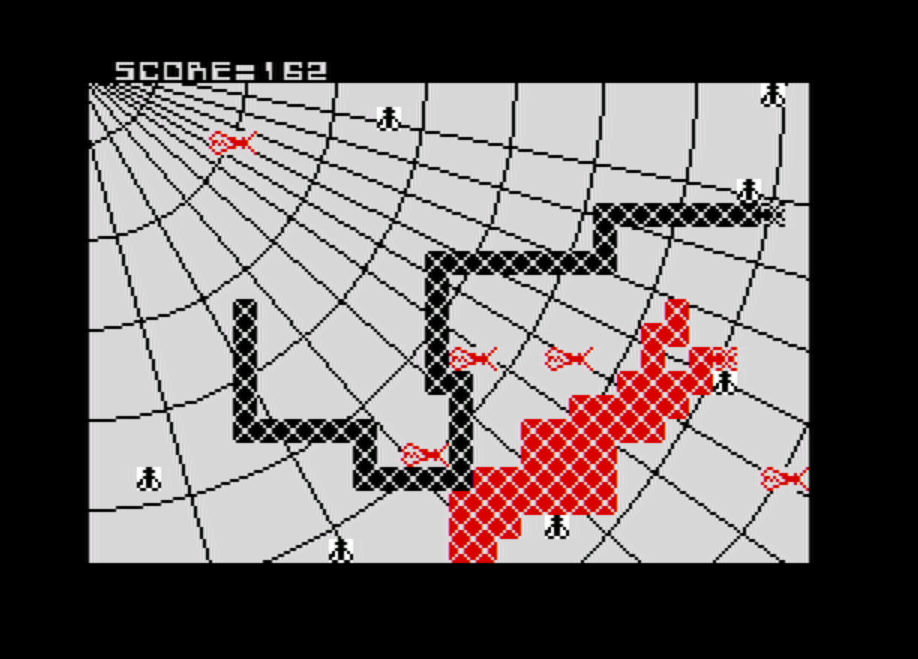 ...Which is oddly enough a 'snake' game, as you can see. Collect the flies, avoid the stationary wasps, try to trap your opponent. I'm not sure what sort of trail the spider is leaving behind but it's obviously to be avoided.

The game starts with a backdrop of a spider web, PLOTted and DRAWn onto the screen. Features of this BASIC game include redefinable keys, which is a welcome touch from the crazy keyboard layouts of the previous tapes' games.

It's nice to see the presence of the computer controlled sna... errr... spider competing against you, but after a few goes I concluded that its presence made it nigh on impossible to get all the flies. After tentatively breaking into the BASIC program I didn't see anything resembling a "well done Spidey, you've scoffed all the flies. Mmmmm, flies..." type message. So I figured the program wasn't actually counting.

"What would George Orwell have thought about a magazine which can only be read by a machine?" we're asked.

A quick thanks for the response from issue 1 - only had one space for a reader's program in this issue though, so I'm guessing 'our Barry' had his work cut out again this month.

Again, encouraging submissions - £5 for anything published (e.g. a letter) and £50 for a program.

From Pete Telfer, scrolled up the screen with a nifty little routine. Some nice POKEs for you in case you'd forgotten:

Hmmm, my spidey sense (or is that snakey sense?) is tingling. I think we could have some learnin' coming up... 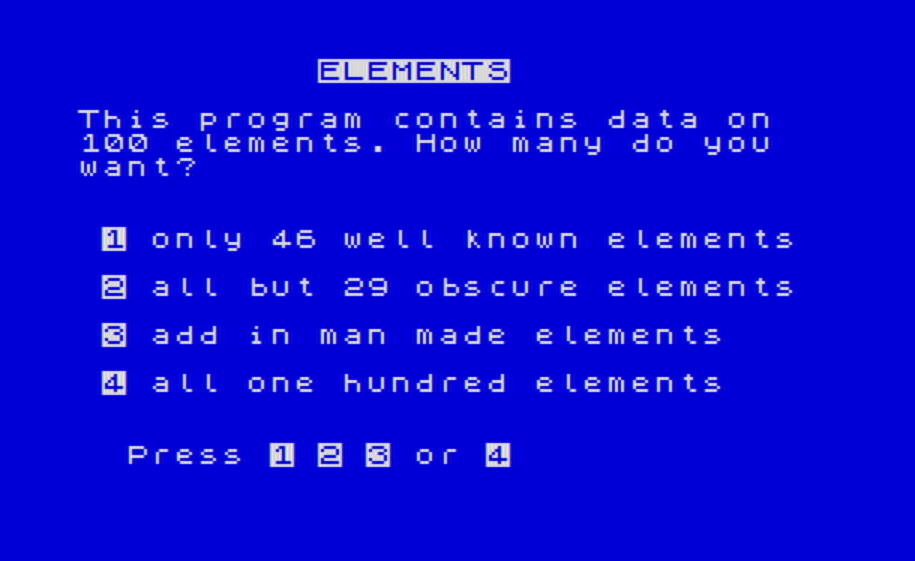 Aaargh..! Never been a massive chemistry fan. Might as well go for the "all one hundred" elements option.

The first choice is to list them all with melting points, boiling points, density etc. (which prints very slowly so would probably take the best part of 20 minutes).

I had a quick go, and was gutted to have scored 0/10, before realising that the INPUT$ answers were actually case sensitive. I had another go and scored 4/10, which was still fairly pitiful as it asked me the same questions a couple of times...

Eventually I concluded that my life's path won't probably require me needing to know the the symbol for Praseodymium, so I decided to carry on through the tape.

SpoilerShow
Pr
Next, we have... Another scroll routine! Flippin' eck, why is this magazine so obsessed with SCROLLing...?

The routine demonstrates a (307 byte) vertical and horizontal pixel scroll that readers can use in their programs.

There's a simple and clear explanation - I guess they assume the readers know some BASIC but not machine code - so there's some info about which POKEs to use, and how to call the routines.

The first in the series of the 'Long Way Home' adventures, a mix of BASIC and machine code. Memories of playing this included a slight annoyance with the parser - "WHAT CAN I SEE" rather than "LOOK", and the blippy sounds taking a while once you've entered a command. Playing it on an emulator was a blessing, as I could speed it up to reduce the pause duration between inputs.

I don't think I ever completed one of these back in the day, so I was committed to giving this one a decent crack (which goes part way to explaining the delay with this post!).

Anyway, the saga starts with you stepping into your "Trans-mat unit" to get home... but something is wrong..! You rematerialize in the wrong place, on a spaceship somewhere. 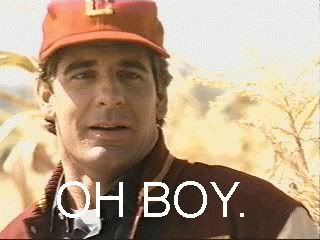 As mentioned earlier, there are some nice graphics for lucky 48K owners, appearing instantly on screen, including some cheeky Speccy references thrown in. 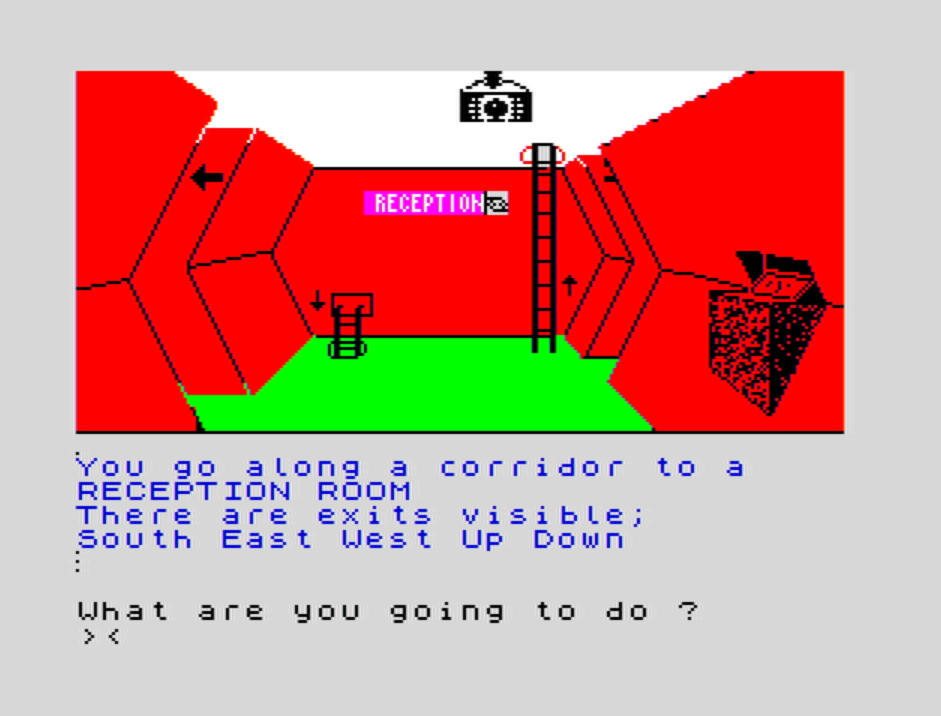 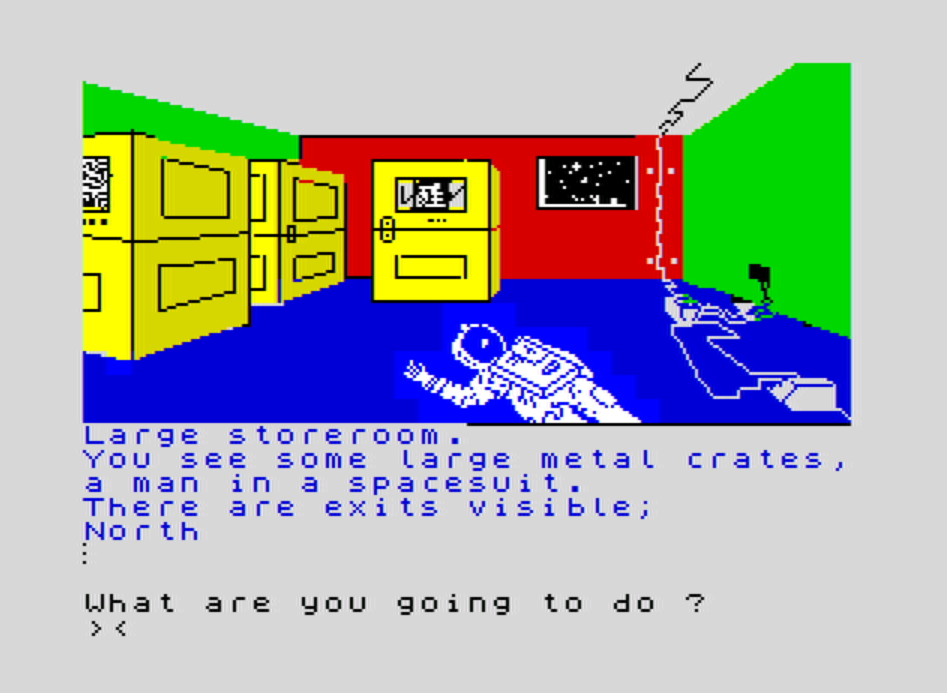 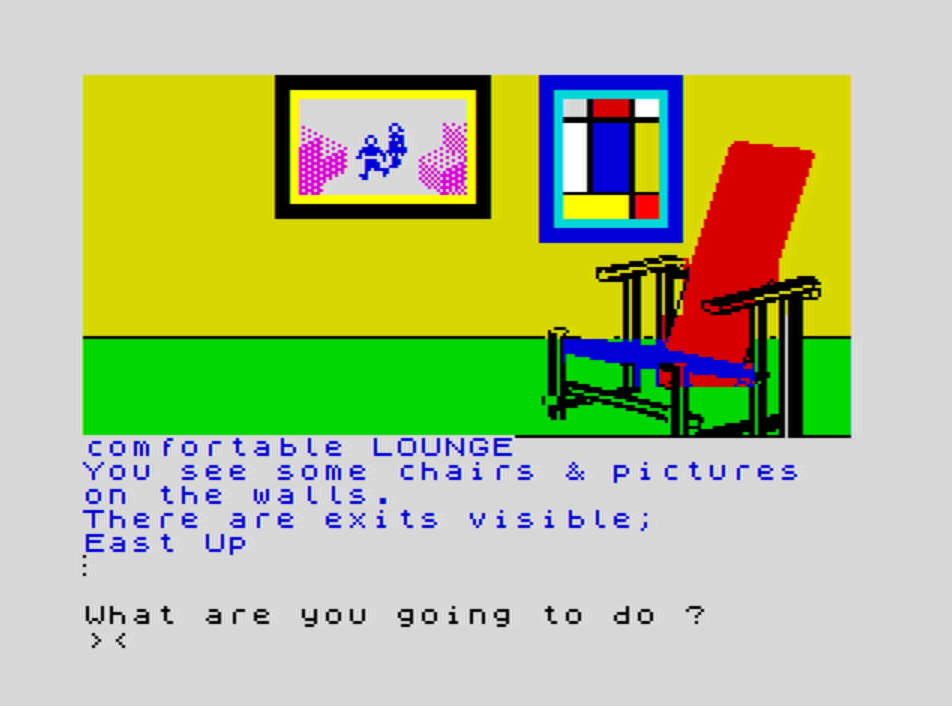 Great use of FLASH in the graphics too, which I failed miserably to reflect in my screen grabs.

What makes this adventure quite tough is the random attacks by Uncle Clive's robots: 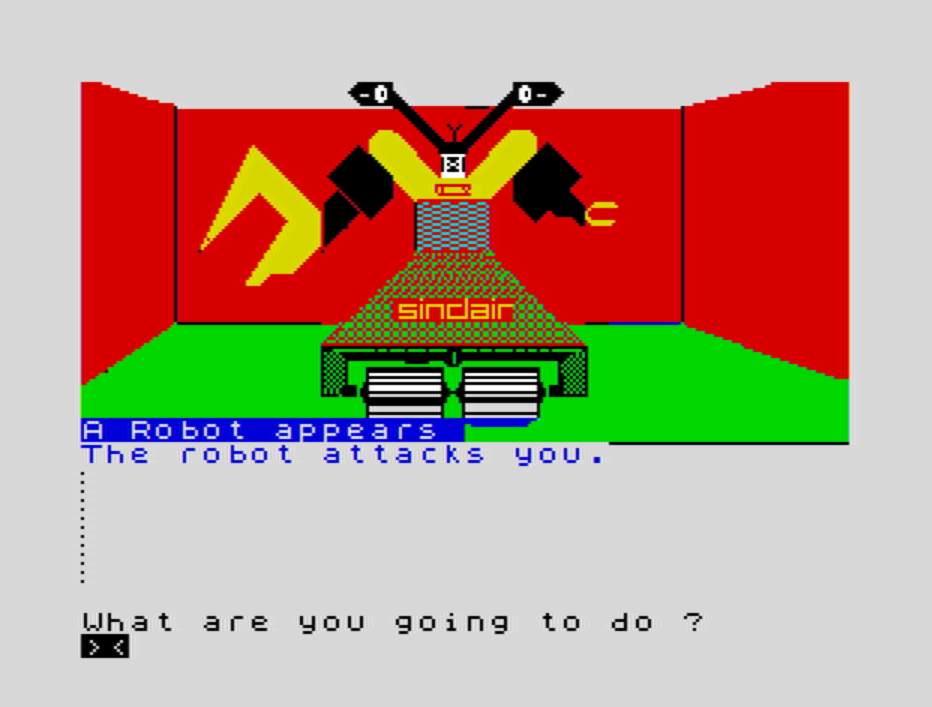 I didn't work out a way of defeating them consistently. I found a laser gun to shoot them with but its powerpack depleted quite soon. The game instructions suggest not to worry if you die - it's part of the learning process. But the regularity with which they seem to turn up adds a sprinkling of luck to the proceedings. I guess these things were flying off the production line in 1984.

With a bit of luck I managed to my amazement to get to the end without cheating - the game is actually fairly easy to complete: 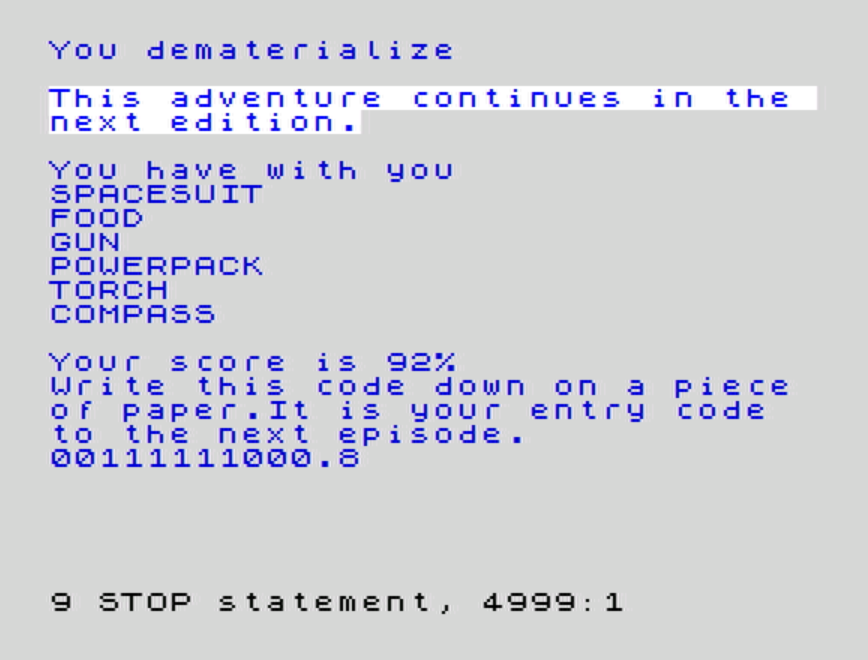 I did find a room with a load of gold/diamonds so perhaps I missed out on escaping with a full bounty, but I didn't want to push my luck with the robots.

Apart from the aforementioned minor annoyances, a pleasant adventuring experience with some nicely drawn locations. Looking forward to the next one already.

OF DUNGEONS AND GREEN MEN

...And a shout out to Brian Howarth, author of the Mysterious Adventure series. This month is dedicated to the first adventure - The Golden Baton

(I don't think I ever played any of this series.)

As far as the hints are concerned, I can only access them after entering the last 6 digits of Digital Fantasia's phone number. I'm not too sure about how useful this is as a security feature, given that (a) their number is on their magazine adverts, and (b) you can BREAK into the BASIC program to reveal this:

Ahem. Anyway, the final feature is an apology for an incorrect Hobbit hint from issue 1 (obviously took a while for someone to point it out).

A game for two players. Ah well, let's try it anyway... Again, I'm not familiar with this game but I'm told that "Cheatability decides how slowly the die changes so that you can control your moves."

Turns out it's a slightly glorified Snakes & Ladders game. Only, you have to make it up to square 100 and then back down to 1 again (not sure if anyone played S&L like that, on the way back being 'regurgitated' by the snake?

Well, I had a few problems running this. Using a couple of emulators, first I had to switch to 16K emulation to get it to work. Secondly, the game started freezing randomly, and I got an error message whenever I landed on a vortex... In the end I tried a different emulator, deleted a PRINT #1 command from the BASIC program, and ended up getting it running. Woohoo..!

...Unfortunately my joy was short-lived as it's a snakes and ladders game, so I played with myself briefly (fnar) and then moved on.

3D Desert Patrol (CRL) - slightly ironic criticism of gameplay sluggishness due to part of the game being written in BASIC (given the nature of most 16/48 programs). Summary: "playable, if somewhat dull".

3D Tanx (DK 'Tronics) (you're getting the theme now?) - a worthy review, "a simple, addictive game with plenty of action. Almost one of the classics."

Jeez, OK so a bit dull but potentially I reckon this might have been a quite handy utility 'BITD' when I was tinkering around with BASIC programs. It's a small bit of code which will renumber your BASIC programs (well, duh..). Instructions include:

...Which is exactly what I decided to do at that point.

So what's this then? 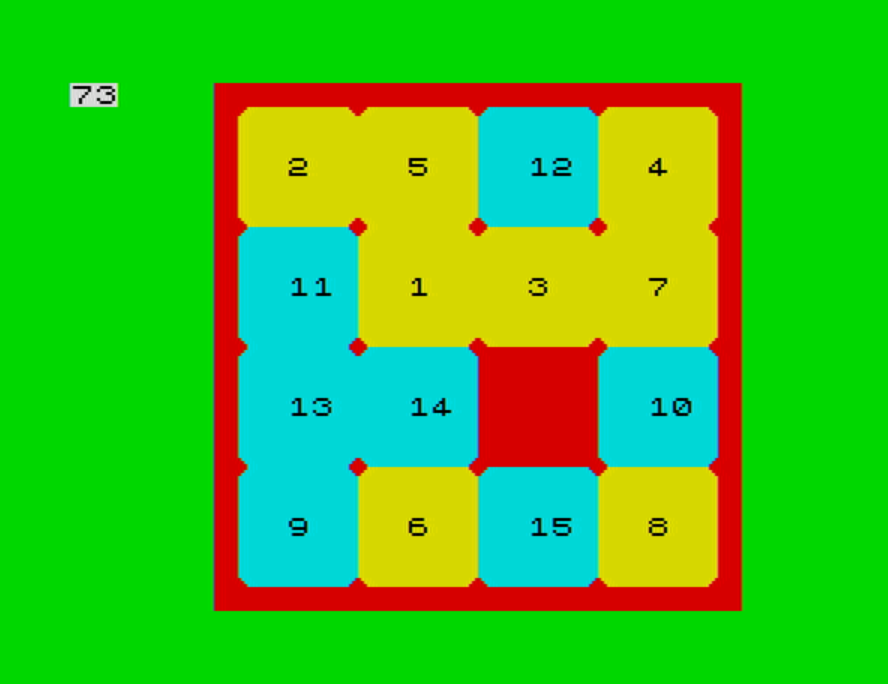 Oh. OK. Well, as you can see I'm not great at these things, and wasn't inspired enough to try to solve it for long.

Finally, there's a call for the next issue's competition - a "CLS" competition. Most exciting way to clear the screen. Anyone want a go? Well, all you need to do is get your entry in by "The Ides of March 1984"...

...And the 1st and 2nd place for the previous animation competition - whaddya reckon..?

Once again a mixed bag, with The Long Way Home clearly the standout program on the tape. Am already looking forward to typing my code into TLWH episode 2 and seeing what happens.


...And I wonder if there will be another SCROLL routine.

The text adventure looks cool with those very crafted graphics (and the Sinclair robot), it doesn't match with average quality!

Great stuff. The Long Way Home looks a lot more polished than I realised, I wonder if all the installment were written on the fly or the author had a grand plan from the start.

Yeah, pretty short but impressive considering it's written in BASIC (apart from the pics which are called in machine code).

Despite being in BASIC the arcade games have tended to be well programmed - not sure how well they've aged (some of them seem a bit dull). At least you seemed to get more on the Microhobby tapes..!

Nice find, that one slipped me by somehow..! It wouldn't surprise me if contributors to the magazine also went on to get into development of some sort.
0 x
Top

Any chance of doing anymore of these @Morkin
0 x
Top

Yeah - I'm part way through one but got stuck on TLWH...

Will be up soon..