Cos 15 colours is all you need girlfriend!
0 x
Top

Could they have chosen orange, or brown, instead of magenta?

And should they have?!
0 x
My 'good' Speccy games
All projects I've been involved in, including Crap Game Comp entries
Top

And should they have?!

1 x
Every man should plant a tree, build a house, and write a ZX Spectrum game.

And should they have?!

All the available browns had been used up by the C64.
2 x
Top

You could do something like, make the BRIGHT bit leave red bright and only darken the green and blue channels, which would give you different colours where green or blue were involved (e.g. yellow would darken to orange, white to pink). But just like you don't get dark black, so you then wouldn't get dark red, either. So you'd only have 14 colours.
0 x
Joefish

Ralf wrote: ↑
Tue Jan 22, 2019 9:56 am
Actually I've heard that Spectrum connected to some chosen monitors would produce grey when "bright black" is used.


Again, because it's not really a digital circuit. Zero isn't actually quite zero, it's just close enough to mostly be indistinguishable. Some hardware configurations will show the difference (though not usually as pronounced as some emulators seemed to suggest). YMMV etc
0 x
Top

Bear in mind also that there are different computers with different video hardware all called ZX Spectrum.
The references to bright black being grey that I've seen are in relation to using an RGB monitor with the Spectrum 128. That machine* puts separate RGB and Bright signals out the RGB port, and how a monitor deals with that is down to the monitor's circuitry.

*The English spec +2 is supposed to be the same, but as far as I remember they all have the "optional" components fitted making the output analogue RGB.
0 x
My rubbish website including the redrawn Amstrad schematics and the Sinclair FAQ wiki.
Top

Due to the limitations of the design.

Sinclair in it’s promotional brochure for the original 16K and 48K (rubber key) machines only described it as having “full colour - 8 colours each for foreground, background and border, plus flashing and brightness intensity control”. Even in the table which compared it to other competitors machines (BBC A, VIC 20, ATARI 400, TI 99/4A) , they list the ZX Spectrum as having 8 colours... [There is however a separate row for a tick for BRIGHT or equivalent].

Why these colours? Simple. Television uses additive colours (unlike print, which uses subtractive colours). In a colour CRT there are three electron guns which fire electrons at the coloured phosphors on the inside of the screen. There are three types of phosphors. One produces red light. One produces green light and the remaining one produces blue light. Each electron gun fires at one type of phosphor, hence the guns are called red, green and blue.

So that’s the first three colours. With all the guns off, you get black (well actually dark grey, as most people don’t watch in complete darkness). So we are now up to four colours.

Now if you switch on two electron guns, two lots of phosphors light up. So the combinations are:
Red and green - the colours add together (as far as the human eye is concerned) and show as yellow.
Red and blue - shows as magenta.
Green and blue - shows as cyan.

Turn on all three guns, and red, green and blue colours add together, producing white. So that’s a total of eight colours: 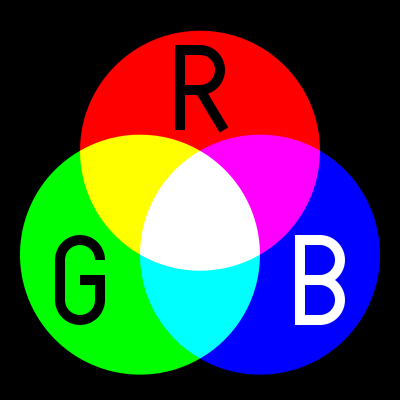 As explained above, the BRIGHT control increases the signal strength going to the electron guns, hence increasing the intensity. But if all the guns are already switched off (for black), there is no signal to boost... (although in some instances, there may be a small signal, as in practice it’s possible to keep all three electron guns slightly switched on).

To produce different colours would have needed more complex circuitry, but Sinclair’s aim was simply to produce a computer that could produce a high resolution colour tv picture at the lowest possible price. So a more complex circuit was out of the question. And the hardware designers were limited in the time they had to develop the machine anyway. As Sinclair wanted it ready to sell as soon as possible...

QBASIC also had 16 colours and it had a light black that was grey. You are wrong and a bad human being.

Should I put a smiley in here

The real reason is that aliens nicked the sixteenth colour...