People are still making stuff for the Sinclair related machines. Tell us about new games and other software that runs on the Spectrum, ZX80/ZX81, Pentagon and Next.
Post Reply
9 posts • Page 1 of 1

Is this going to be the best Tetris clone ever? There is already a .sna, but soon will be released a .tap with some new extras... 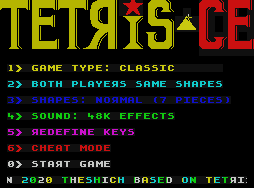 Thanks, Andre! As someone who helped developer (TheShich) a little with this game I want to add some information.

Tetris Championship Edition is the mod of Tetris 2 (by František Fuka) with one main goal - make this excellent game more suitable for modern players who already played NES Tetris, Tetris 99 etc. There are new scoring system, new colors, new controls and lots of other improvements.

* you can hold left or right key and piece will move continuously in that direction (you had to press these keys many times before);
* soft drop implemented;
* you can now rotate pieces to the right (previously it was only to the left);
* accordingly, Redefine Keys screen has been changed;
* the randomizer has been greatly improved, now the same frequency of all pieces is guaranteed;
* scoring system has been changed: now it’s much more profitable to clean several lines at once, especialy 4;
* the level increases when a certain amount of lines is cleared (previously it did not change at all);
* the number of levels in the classic mode has been increased: earlier, only levels 1-8 were available, now it's 0-9 by default and 10-19 with DROP key pressed;
* theoretically the number of levels is not limited;
* two tracks by František Fuka was replaced by his another two tracks;
* in Tetris 2 mode all levels have been redone (now there are 50 of them, but there will be more), and this mode was named Puzzle;
* cheat mode for Puzzle was added;
* Normal Tetris mode was renamed to Classic;
* now you can listen to music along with 48k effects (you had to choose one or another before);
* colors of the pieces have been changed according to modern Tetris Guidelines (although orange was replaced with white, because there is no orange on the ZX Spectrum);
* pieces has texture now (only one for now, but there will be more);
* Puzzle mode now has harder levels limited by a timer (in the original, there was simply a transition to a new level if time was out). 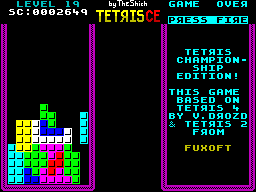 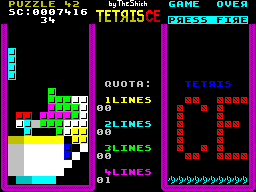 And here's plans for future:

* display next piece;
* add line counter;
* make the transition to a new level more visually noticeable;
* add new tunes;
* new textures on the pieces;
* show who in the lead in Classic mode;
* add another 50 levels for the Puzzle mode;
* make it possible to switch to classic levels;
* somehow fit the entire game in 40 KB.

The author of Tetris Championshion Edition will gladly accept all your suggestions, so send them to theshich@gmail.com or just put them here, I'll tell him. You can download SNA here.

Hi, I'm the author of this CE hack.
Please let me know how should I improve Tetris CE with your vote here:
https://www.tricider.com/admin/2pRLpwiTkl3/C2K8lA2ps8d
2 x
Top

This looks amazing, I’ll definitely give this a play tonight, a couple of feature requests please:

Next piece is a must have (glad to see it on the feature list) but a hold and replace piece would be great, although some may view it as cheating but it’s in most modern Tetris games.

Please include the excellent David Whittaker music from the original Spectrum version. It’s so evocative of the game for the Spectrum and really under appreciated (and the Gameboy Tetris music option would be nice too!)

Thanks again for the great work so far, it’s always brilliant to see fantastic work like this!
0 x
Top

Res, but maybe a selectable option so people may choose to use it or not.
Also make some great loading screen

BY the way, it seems very polished.
1 x
Top

toot_toot wrote: ↑
Sat Jan 25, 2020 12:50 pm
Next piece is a must have (glad to see it on the feature list) but a hold and replace piece would be great, although some may view it as cheating but it’s in most modern Tetris games.

Next piece feature is already there. But hold piece will be somewhat tricky. Is it done with 6th key?


toot_toot wrote: ↑
Sat Jan 25, 2020 12:50 pm
Please include the excellent David Whittaker music from the original Spectrum version. It’s so evocative of the game for the Spectrum and really under appreciated (and the Gameboy Tetris music option would be nice too!)

Whittaker's melody is one the best, but built-in Fuxsoft player can play only special FXM modules (only few do exist).
Making new FMX modules (GB theme for example) with open source compiller is a tricky thing too.
Not much I can do about it without replacing the player.
0 x
Top

* next piece improovements (black background and space between 1UP and 2UP next peieces)
* game initialization (Golden Triangle logo and music)
* beta loading screen (no logo yet; the screen is a colored version of Human Killing Machine first stage background)
* now available in TAP and SCL formats 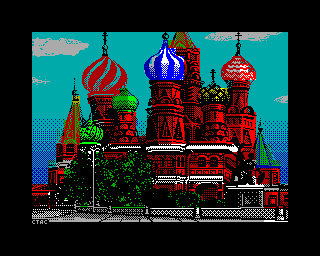