People are still making stuff for the Sinclair related machines. Tell us about new games and other software that runs on the Spectrum, ZX80/ZX81, Pentagon and Next.
Post Reply
111 posts

Small update time. Work continues, though Richard is having a wee holiday. This means I've been working on some more room decor, specifically the portraits - 20 of them, in fact - which will hang on the walls. You'll also see we now have the working trap door. 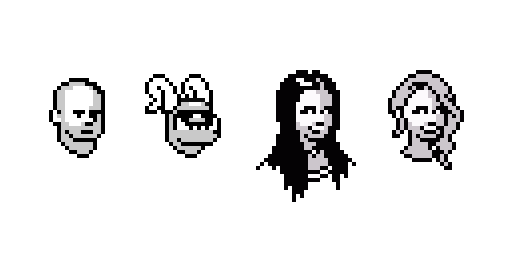 Graphic reveals will probably start to become less now - you're only seeing a small fraction of parts of the portraits, for example - as we'd like to surprise you when you play the final game.
4 x
Top

Nice. Is one of those a self portrait?
0 x
My 'good' Speccy games
All projects I've been involved in, including Crap Game Comp entries
Top

What platform will it run on?
0 x
Author of the ZX Spectrum C Programmer's Getting Started Guide
Top

Be great if this was going to be ported to the Spectrum NEXT!!
0 x
Top

Even better if it was ported to the ZX Spectrum itself!

Thanks! Yes, they're all portrait's of real people. I'm the 2nd from left.

I think I may have said already in here, it'd be aces if it was ported to both, but neither myself of Richard would be directly involved other than to provide any guidance if asked. I'd make my graphics available for a conversion, though I imagine they may have to be cut down slightly but I may be talking out my hole. As to who would produce a conversion, that's up to whoever wants to tackle it. I think Bob (Smith) has expressed an interest but only if nobody else has made a start to see if it can be done. Bob also mentioned that he thinks he could get it onto the Spectrum. Personally, I'd love it if Bob would do it.

What platform will it run on?

It'll be on Windows and Android. There maybe be a chance for it to go on iOS but who knows and see my reply above regarding Spectrum/Next.

For something that seems so simple, I agonised over this. With some input from Richard, where he came to a decision regarding sizing, I then had to come up with something that I liked the look of. But, I went back to the original inlay art and there was the skirting RIGHT THERE!! I just made it chunkier.

There's still a long way to go. There's the planned gameplay extras to add and still tons of graphics to do - I mean hecking tons! - but I'm making my way through them steadily.
Although we're a long way off, we've also turned our thoughts to HUD. The scroll will probably stay in some form or other, just not as it is in the current WiPs and ripped from the original game. I've got a pretty good idea how I'd like it to look and I need to produce some mock-ups to see if it could work.
0 x
Top

Also need to remember to add a representation of that purple-robed ghoul from the box art - maybe in place of the rather crap ghost sprite that shows up in the game!
0 x
Joefish

Oh none of the actual sprites have actually been done. The sprites currently being used are stand-ins from other games until I get around to doing the real ones.
Don’t worry, the purple robed ghoul will make an appearance in some for or another.
0 x
Top
Post Reply
111 posts