This is the place for general discussion and updates about the ZXDB Database. This forum is not specific to Spectrum Computing.

Can anyone tell me what's the correct name of this mod?

Should it be "Home Island Dizzy" or "Home Iceland Dizzy"? Or both?
0 x
Creator of ZXDB, BIFROST/NIRVANA, ZX7/RCS, zxgraph, and others.
Top

I could be completely wrong but checking out the map and spelling “Iseland” I’d go with “Island”.
I can’t see why it’d be Iceland as there seems to be no connection, from the map it looks like the home island of Dizzy and a misspelling of island.
0 x
Top

However the map contains an intro screen that says "Home Iceland Dizzy"...

And the game page contains a screen that says "Home Island Dizzy".
0 x
Creator of ZXDB, BIFROST/NIRVANA, ZX7/RCS, zxgraph, and others.
Top

I would say the game's author wasn't very coherent about the title. Nor fluent in English

That's what we see when we start original Russian version, first the game intro and later loading screen: 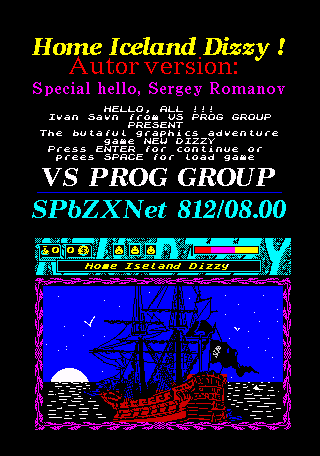 So the game is called here Home Iceland Dizzy, Home Iseland Dizzy and even New Dizzy. It is also "butaful"

I would say he meant island - land surrounded by water and not iceland - land covered with ice. But he didn't know how to spell it and
used several wrong spellings in several places.

Make your choice about it. Actually any choice will be as good as the others

And the game page contains a screen that says "Home Island Dizzy".

Yip, but like I say, no reference to Iceland and everything, map included, points to “island” and iseland/Iceland is a misspelling of island due to English not being the author’s first language
0 x
Top

In every Russian database and website it's called Home Iceland Dizzy, and it was selling with this name long time ago (I saw it with my own eyes). So it's Iceland unfortunately.
0 x
Top
Post Reply
7 posts • Page 1 of 1