OK, you can now shoot enemies and they explode and die!
And there are solid rock obstacles that block your shots.
The player still can't collide with anything. And the enemies don't move or fire back.

Still, while you're waiting, check out these pictures of some cheeky cosplay bunny action from GEEKxGIRLS:
http://geekxgirls.com/article.php?ID=3902
0 x
Joefish

First go at the Go-Go BunnyGun loading screen now up on ZXArt:

Looking good! Although perhaps the title logo could have another coloque to improve its readability

I know what you mean - there isn't much contrast between white and cyan. But blue on white is too dark.
I've tried moving it down below the blue bit at least. If I could do it blue-on-cyan it might look good, but that makes it very difficult to have the cyan sky stipple down to white.

Maybe I can redraw it to better fit character squares, so I can then recolour it. Here I've re-used the logo I'd drawn to use in the game, with an outline added because it was inverted, and that made has made it spill over into more characters. I might have to scrap the in-game one anyway, or shrink it, as I'm running out of memory!
0 x
Joefish

Argh sorry Joe—I'm not very keen on this screen. The bottom segment is decent, especially the outlines of the hair and blades of grass, but the green to white of the sky looks totally wrong to me.

I'm not averse to the theme, far from it, but how does it fit the game?
0 x
My 'good' Speccy games
All projects I've been involved in, including Crap Game Comp entries
Top

R-Tape wrote: ↑
Thu Aug 08, 2019 7:51 pm
Argh sorry Joe—I'm not very keen on this screen. The bottom segment is decent, especially the outlines of the hair and blades of grass, but the green to white of the sky looks totally wrong to me.
I'm not averse to the theme, far from it, but how does it fit the game?

I just wanted to do something completely different to the usual loading screen, of trying to depict some hyper-realistic version of the game itself. What's the point in doing that anyway? It just seems to me to highlight how lacking the in-game graphics are compared to a static screen. And I really wanted to take a stand against all-black backgrounds! (Sorry!

) My intention for the game has always been to use Animé styling, as if it was the game of some cartoon show. So it's one of the pilots having some down-time before it all kicks off. I thought that was clear - she's got the ears on and is in some sort of jumpsuit, just like the sprites I've drawn. The plan was to have one or more other flyers zipping overhead, but I'm not sure I'm that good at drawing 3D objects! (And anyway, that'd leave nowhere for the title to go

It at least seemed to me more relateable than just randomly depicting some half-naked alien 'Lady Not-Appearing-In-This-Game', or, for that matter, some shocking case of acute infant hypoxia! (ahem)

Not sure what the problem is with going from green hills to white then fading to cyan and blue higher up though. Seems to me that skies kind of do that. I'd use more shades of blue if I had them! And switching BRIGHT on and off makes it harder to use stipples for longer transitions, or to then draw INKed objects over the top of those transitions without them taking on the bands of shading too. Surely going from green straight to cyan is far more jarring? I suppose I could bring the cyan stippling down, though it would have to fit around that 'ear'. Again, if I could be bothered, maybe I should be drawing cloud outlines in the sky instead of just plain stipples, then I could work that around other objects.

I'm still not finished with it, anyway. I've added more details to the hair and the outfit, and I'm trying to improve the logo. If I can draw something interesting in the sky in its place, I might just leave the title off altogether...

Yip, I’d say that clouds are your best pal here. A section of the sky with clouds where the ears are would mean no stippling and therefore no clash or workaround on the ears. It’d also mean you could lower the logo by a couple of pixels, too, which I think would be helpful.

On my phone so I can’t show examples at the moment (I’ll do that when I get home later) but I use clouds on the horizon for this type of stuff. On non-Spectrum art, I use it as both a stylistic and framing device but on the Spectrum it has the added benefit of preventing any attribute clash.

I’m not even going to hide the fact that I’m influenced by the landscapes from Studio Ghibli films where there’s land and sky!
0 x
Top

The weakest point of that screen is invisible title. The rest is okay for me. Personally I maybe I would do some stuff differently but everybody has his own style.
0 x
Top

redballoon wrote: ↑
Fri Aug 09, 2019 11:53 am
I’m not even going to hide the fact that I’m influenced by the landscapes from Studio Ghibli films where there’s land and sky!

'Ghibli'? Nope, can't say I've ever heard of it, nor been influenced by it in any way whatsoever...
Ahem. 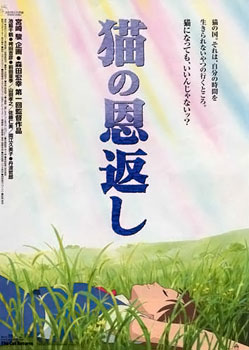 Ralf wrote: ↑
Fri Aug 09, 2019 12:49 pm
The weakest point of that screen is invisible title. The rest is okay for me. Personally I maybe I would do some stuff differently but everybody has his own style.

The biggest problem I have with it is the inconsistency of colours between emulators and renderings of ZX Spectrum graphics, and across different monitors as well. I deliberately kept BRIGHT off, but the contrast between cyan and white varies enormously, making it hard to judge what you can get away with.

But yes, I agree it's not good enough. If there was an in-between shade of mid-blue I'd do the sky in that and the title in white. But making the ground go from green to cyan then fade up to blue is too overwhelming with colour - it all looks over-saturated.

I need to re-do the title in solid colour somehow. Or maybe add some sort of darker geometrical shape behind it so it's more visible (anyone got a gallery of corny 80s video titling?).
0 x
Joefish