Very cool and easy to manage, what else can I say? I always liked Hellfire.
About colours, sometimes I confuse pilotesses' hair with power-up
0 x
Top

hikoki wrote: ↑
Tue Jan 15, 2019 6:41 pm
Very cool and easy to manage, what else can I say? I always liked Hellfire.
About colours, sometimes I confuse pilotesses' hair with power-up

Thanks, I'm glad someone else could work it! Sorry about the colour confusion, but only certain colour combos work for the characters. After I'd designed the characters how I wanted, I tried to match the pick-ups to hair or rocket colour, but had to settle on matching the suit as I wanted to use white for the pick-up surround and have green free for the penalty pick-up. I tried swapping the magenta/green suit/hair combination but it just wasn't as good. The code now makes the pick-up change colour if it stays on screen for too long; a bit like Raiden, but I thought it was too much hassle to make them float around in a circle too!

Good spot about the game influences - I really like Hellfire but I think that 4 is too many firing options - it's just a little too hard to work out how many times to hit the switch button to get the weapon you want. They should have kept it to 3 (e.g. Panzer Dragoon Orta is much easier to manage). So instead of e.g. four diagonal shots you've got Amy's Spread Fire and reversed Bunny-Butt-Shot. (Although that triangular pattern of fire comes from the Spread Bomb in Wings of Death).

I also like Side Arms and Raiga: Strato Fighter where you can turn around and shoot backwards - that's how I settled on two modes for each pilot. I did try having you hold the button then selecting UP/DOWN/LEFT/RIGHT for firing pattern, or automatically turning around when you move into the right third of the screen, but kept coming back to wanting everything controlled precisely from just the one FIRE button. Crosswize lets you change direction then hold FIRE to keep facing that way, but that changes the whole nature of the game. So that leaves holding FIRE as a special weapon (like Air Buster or R-Type).

Hedi's orbiting creature is a bit of the destructive orbs/'options' from Gradius, Cybernoid and R-Type, and a bit of the weapon pod from Prehistoric Isle, that changes function depending on where you move it to relative to the player (forward shot, bombs, mines, etc.). So in mine you can upgrade it to fire on each of the four diagonals. But it doesn't latch directly in front of you, as that could give you a huge advantage over the other weapons (like picking the R-Type clone ship in Pulstar makes it much easier). I guess it's also some kind of Pokémon...

Miya (yellow) is an obvious copy of one of my favourite shoot-em-ups (after R-Type), which is Thunder Cross II. I once tried writing a vertical shooter in STOS on the ST and worked out how to control outrigger drones with a single fire button; holding it to deploy them, then releasing and holding again to keep them at a distance. I keep forgetting I gave her teddy-bears in flying saucers as outriggers though! I guess they come from The New Zealand Story but they fitted the attribute squares nicely. They were always meant to be floating cannons like the ones in the Thunder Cross games, but I found it so much harder to design colours into a 2x2 sprite compared to all the 3x3 ones. Then I got something stuck in my head about 'Kill Enhancement Force' or 'KEF-Teddies' and it had to go somewhere.

(And yes, there's a reason behind each of the pilot's names. Who can explain all three???

And can anyone familiar enough with a Greek menu explain 'KEF-Teddies' ??????

Thanks for the shmup references!
I can be smart-ass enough to know Hedi is a Jedi and Miya seems to come from a rpg game called Goddesskiss :
SpoilerShow 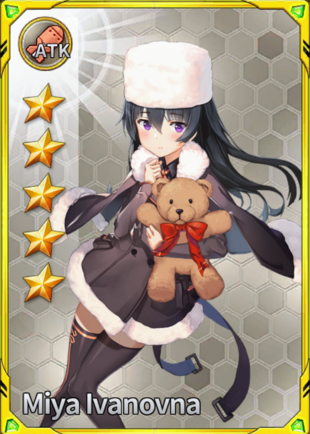 Perhaps you can flash powerups between bright/unbright if that makes sense.
this is speculation spam, wasdnm could work if you use n to lock shoot direction while pressing any wasd combo
0 x
Top

No, it's more literal (and a bit more daft) than that. It's not from other media. Lucky find of a 'Miya' with a teddy-bear though!!!
I did want them to sound like different nationalities. I don't suppose anyone else is going to try?

AmyShow
'Amy' because she 'Aims' in multiple directions (spread fire, turning round).
HeidiShow
'Heidi' because she 'Hides' behind a cuddly toy / shield creature. (Sorry, 'Hedi' was a typo!!!)
MiyaShow
'Miya' is the more complicated one. It's a Japanese girl's name that's written as a single character meaning 'Temple'. But written as two separate characters 'mi ya' means 'three arrows', which is her firing technique.

As for pressing keys or anything, I wanted everything to be done with the joystick. I find it far too distracting in a fast game to have to find a keyboard key. I suppose emulators that can map an extra joypad button to a keypress can take care of that, but it's not authentic.
And particularly at retro game fairs most people don't read instructions, and I don't want them bashing the keyboard of one of my machines!

But I do like different control mechanisms - I've always wanted to do a twin-stick shooter, tank-control, or even better, twin-stick mech-driving game.
1 x
Joefish

I do love punny names

Perhaps you could keep the names "in the same family" and change Miya to Trisha?
SpoilerShow
tri-shot
0 x
Top

Thanks about the balls!!! I may give them a go

The secret is the sauce! Add cinnamon and nutmeg with a pinch of oregano, olive oil and a dash of lemon juice to chopped tomatoes. Warm it up and add the meatballs. It's how they serve it in Kos, while flat-out denying that 400 years of Turkish occupation has in any way influenced Greek cooking! Or their coffee!

Sorry, but I wouldn't use the name 'Trisha' for anything! Except maybe a female-led version of Trashman...
(This may be confusing if you don't know that 'Trisha Goddard' is kind of a UK Jerry Springer, without the personality).

As for a PS3 controller, I'm not sure where'd you'd plug that in to a Spectrum! A game that uses a 2-button mouse to fire left/right could be interesting though, and still realistic; I really enjoyed playing Side Arms on the ST like that.
0 x
Joefish

When it comes to saving the galaxy, you can recruit pilots from all over the world.
It's not a Doctor Who game, they don't all have to come from Sheffield!

Just realised that I think the four diagonal shots fired by Heidi's orbiting Hoon are unique to it; the other spread shots don't use the same angles. That means that (like Amy's Bunny-Butt-Shot) I can use a unique graphic.

It would have to be small - a simple shape I could sketch in maybe 5x5 pixels maximum with a longer trail behind it. But what could the Hoon be firing?
0 x
Joefish