Joefish wrote: ↑
Fri Aug 09, 2019 2:23 pm
The biggest problem I have with it is the inconsistency of colours between emulators and renderings of ZX Spectrum graphics, and across different monitors as well.

I loaded up IK+ the other day and I was wondering why on earth they used bright blue right near non bright blue in the sun's reflection on the water. It appears to spoil an otherwise impeccable bit of artwork but then I remembered that the difference between these colours via a real ULA is hard to even see, and even harder via RF picture on a 14inch TV

There’s also the fact that the 48K Speccy displays color intensities completely differenly from all the later models. The darker the color, the less of a difference there is between the bright and the non-bright version.

When I was finalizing the loading screen for Yankee, I was doing it on a real Spectrum hooked up to a CRT TV. Boy, was I in for a surprise. Had do rethink a lot of dithering and color/brightness choices.
0 x
Every man should plant a tree, build a house, and write a ZX Spectrum game.

OK, latest rework. Removed the title completely for now and tried to add in the other two pilots. This is more like what I had in mind originally. I've detailed the suit and hair in the foreground a bit more too. Struggling with the smaller faces though. Drawing the rockets at angles was really hard too. The white blocky area is roughly where I plan to put big white fluffy clouds, though I'll firm that up once I've had another crack at the logo. If anyone wants to try some pixel work to improve the two smaller faces I'd be glad of any help!

It's a nice picture! I had a quick go at the faces, couldn't resist laying a few pixels on their hair and bodies as well. You're of course free to keep/modify whatever you like. 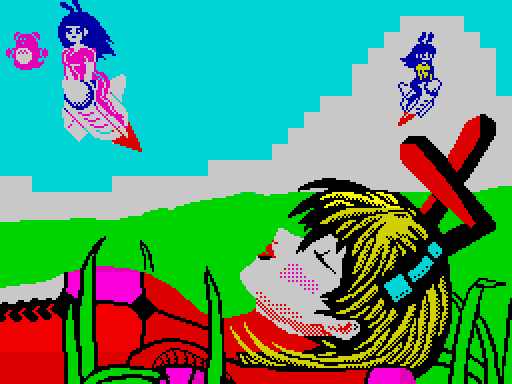 Dang it. That’s pretty brilliant!
1 x
Every man should plant a tree, build a house, and write a ZX Spectrum game.

Oh that's much better, thanks! Those faces are brilliant; the lowered fringes are a great improvement, as are the way you've done the eyes. The smaller yellow body is a lot better but I know I needed to work on that anyway; it looked like it was turned to the left instead of the right! The magenta suit may have been a bit too shiny at the front on mine so I'll take a closer look at what you've done there this evening. I really wanted the hair to be green there though as that's the character design in-game, but the lack of contrast with cyan is pretty poor compared to the blue. Anyway, the smller of those two rockets is green in the game, and her hair is cyan, but I don't think that's going to happen with attributes, nor on a white background!

I really should have spotted they needed a fringe based on all the animé faces I've tried to find for references, but thanks again, that's great!

Actually, I just noticed that you've given the magenta pilot short sleeves; that's how they are in game, the arms are mostly bare. And it looks much better than my trying to outline coloured sleeves. So it's the girl lying down at the bottom that I've drawn wrong! But I think I'll leave that. I might try it with white for the arm, but I quite like the patches of colour for shoulder / elbow pads for a bit of variety - and the ability to use BRIGHT on and off for shading these parts.
1 x
Joefish

Much as I want to keep this game strictly 48K for original Speccys, I think I'm going to need a bit of code that detects a 128K model and saves the loading screen to flash up as an attract mode...
And make it so the title part is entirely within the cyan background area, so that it can be faded in and out via attributes...
0 x
Joefish

Yeah, I took some liberty with the short sleeves, thinking that it would provide greater contrast between the arms and body, but if that's how they appear in-game then that's even better.

I think you're allowed some liberty with your own work when it comes to colour choices (options really) and the like on the spectrum, so I'd say, just go with what ever you think looks best and it'll be fine.

The girl on the bottom looks great as she is! Perhaps she's sporting a long sleeved suit on her day off.

Noticed a couple of bits of illegal colouring around the attributes when I imported the changes to ZX-Paintbrush. One pixel in the hair which was easily covered, but the ankle is a bit tricky. I changed a few pixels in the shoulder so there was less magenta in the 'hair' area. But I think I need to re-work the ankle around the attributes. Maybe by adjusting the rocket fin on that side somehow...

I tried green hair and it really doesn't show up, so instead I've changed the other girl's to black. They don't match the in-game characters, but at least there's a difference between them on this screen.

I found that by moving the flying creature up a pixel I could add another character square of white paper, which makes his eyes a bit clearer.

I wondered why she had a crucifix sticking out of her head! Those are ears? A bit linear sort of straight, hard edged for rabbits ears, aren't they? But then I don't know the game so perhaps they are meant to be like wood. Colour is a bit dark too.
0 x
Top
Post Reply
125 posts