What are the "lost" Ultimate arcade games?

What are the "lost" Ultimate arcade games?

I've always been really curious to know what Ultimate did before they were Ultimate, and I've been having a little dig around.

We know for sure that they made Dingo (1983) - it's credited onscreen to Ashby Computers And Graphics Ltd. 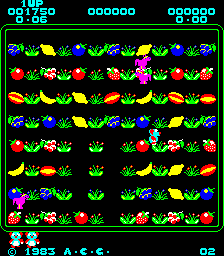 It seems to be universally accepted that they also made Blue Print for Jaleco the previous year, though I can find no actual primary evidence for this.

It's certainly in their sort of style, though, and has a noticeably British sense of humour (get killed early and it'll enquire as to whether you read the instructions).

A 1985 article in Commodore User credits it to them, but also Gyruss, which seems rather more dubious - Wikipedia lists a whole bunch of Japanese guys as authors. 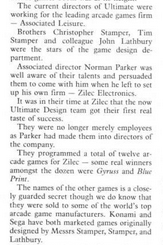 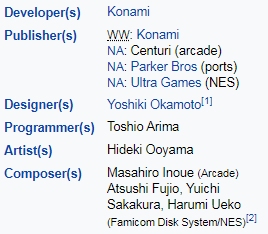 The article says that the Stampers made 12 games for Zilec Electronics, but that the other 10 are a closely-guarded secret. So what else did the company publish? Games Database gives us a list which excludes Gyruss but otherwise conveniently comprises exactly 11 games including Blue Print, ie 10 others. 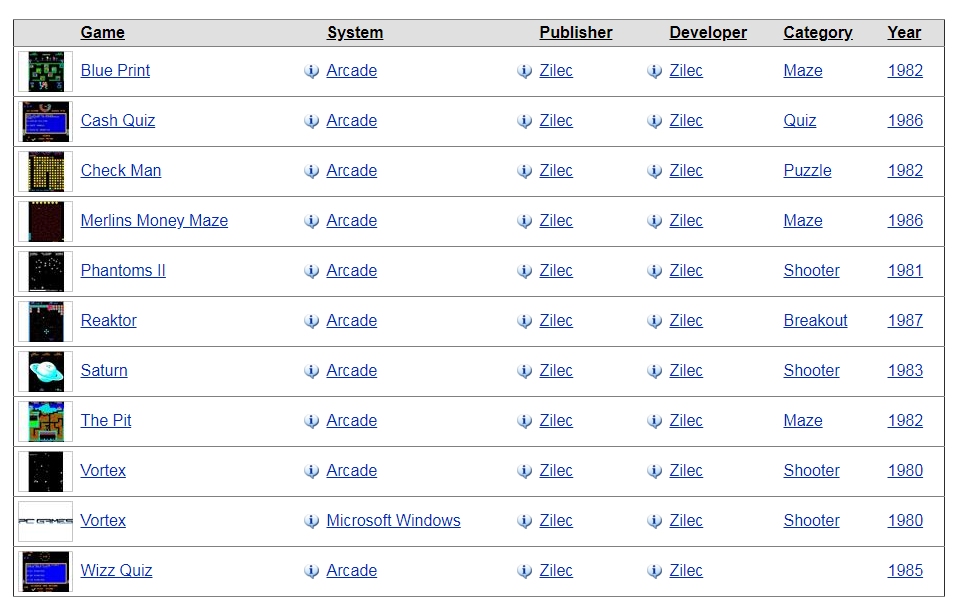 We know we're looking in quite a narrow window - Jetpac, the first proper Ultimate game, came out in May 1983. The Stampers claimed at the time to be "the most experienced arcade video game design team in Britain" so they must have had some titles to their name by then.

Check Man (1982), then, seems like a no-brainer. Published in both Zilec and Jaleco versions, it's very much got the look and feel of the games we know they made, and the timing and connections fit. 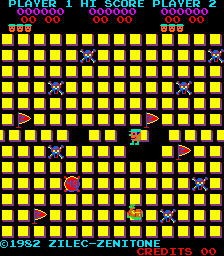 Wizz Quiz and Cash Quiz, meanwhile, have some interesting features:

(Interestingly they were also published by Konami as well as Zilec, so maybe we can't rule Gyruss out entirely.) 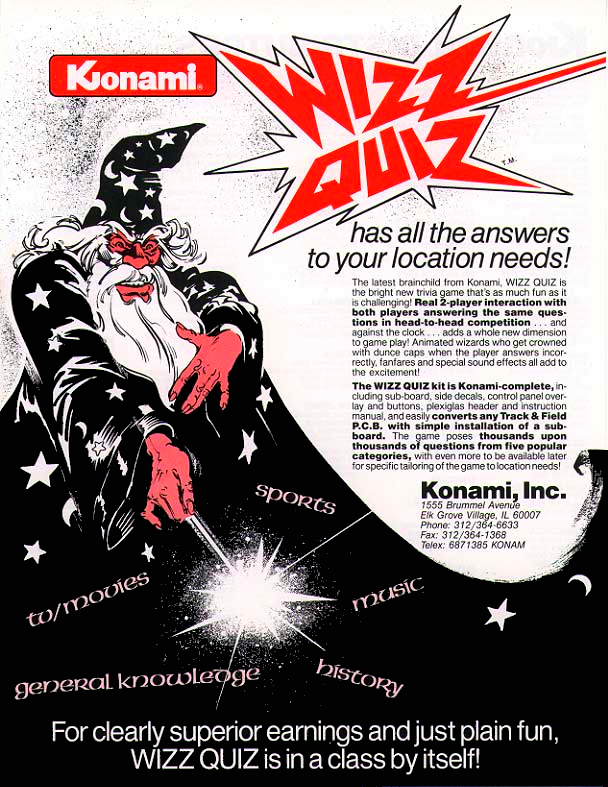 Merlin's Money Maze - an incredibly savage cash-prizes maze game - also has a familiar-looking wizard and definitely feels like the work of the same authors as Cash Quiz and Wizz Quiz, so we'll chalk that one up too.

From here, though, clues get thinner on the ground. Not listed on that GDB page is another Zilec/Jaleco collaboration called Grasspin, and the minute I took a look at a video of it on YouTube I thought "that's got the Ashby Computers & Graphics vibe all over it".

(Fun trivia fact: its music is a slightly tweaked version of the soundtrack from Namco's New Rally-X, released two years earlier, and itself based on the intermission music from Pac-Man.)

While researching Grasspin, I stumbled across the Wiki entry for Jaleco, which sure enough explicitly credits it to ACG, although it doesn't offer any citation for the claim.

It also adds Saturn (1983) from the GDB list. Saturn is a pretty bog-standard Galaxian derivative, and the only tangible connection is that it has a very similar front end to Blue Print. Interestingly, it does share some aspects of Gyruss, though, in the way you travel through a solar system past various planets to the accompaniment of vaguely classical-sounding music. We have no reason to disbelieve the Wiki entry at this point, so let's put it in as well.

(Note, btw, at 3m in that video, some short bursts of some music you may have heard in another arcade game. Buggered if I can put my finger on it at this exact moment.)

[EDIT: this page appears to confirm the ACG team's involvement in both Grasspin and Saturn.]

What about the rest of the GDB list? We can rule out Reaktor as it's from 1987. And we know from a Retro Gamer feature in around 2010 that The Pit was the work of a Bridlington chap by the name of Andy Walker, later of Taskset. But funnily enough there IS a strong Ultimate connection there:

(The same article that quote is taken from notes that Walker went on to design an unproduced game called Stamper. The RG feature also posits the notion that The Pit, which came out in 1982, may in fact have been the Stampers' very first published videogaming work, so it must have preceded Blue Print. This seems an apt time to repeat my call for a Speccy port based on my own mockup - guys, it might be the first Ultimate game ffs 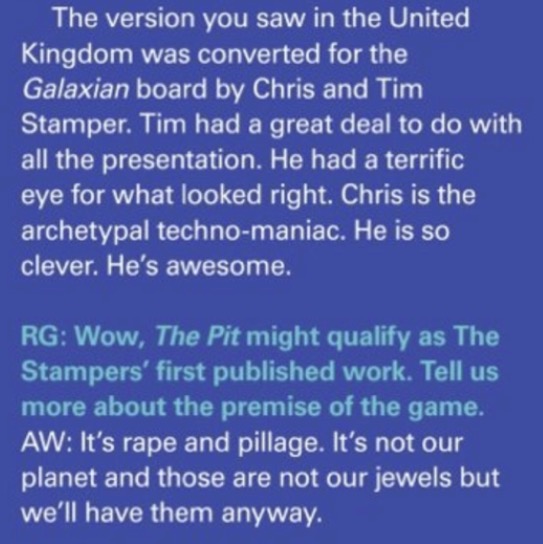 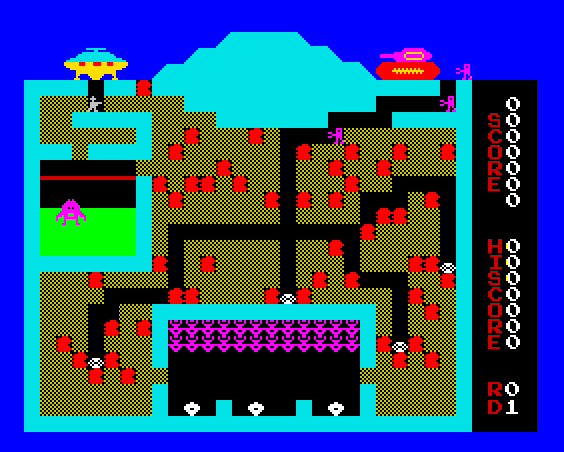 But WAS it the first? Vortex dates back to 1980 and is a primitive monochrome Asteroids knockoff produced for Zilec by Associated Leisure, but it's possible the Stampers did some sort of work on it, as we learn from another Retro Gamer piece a year earlier: 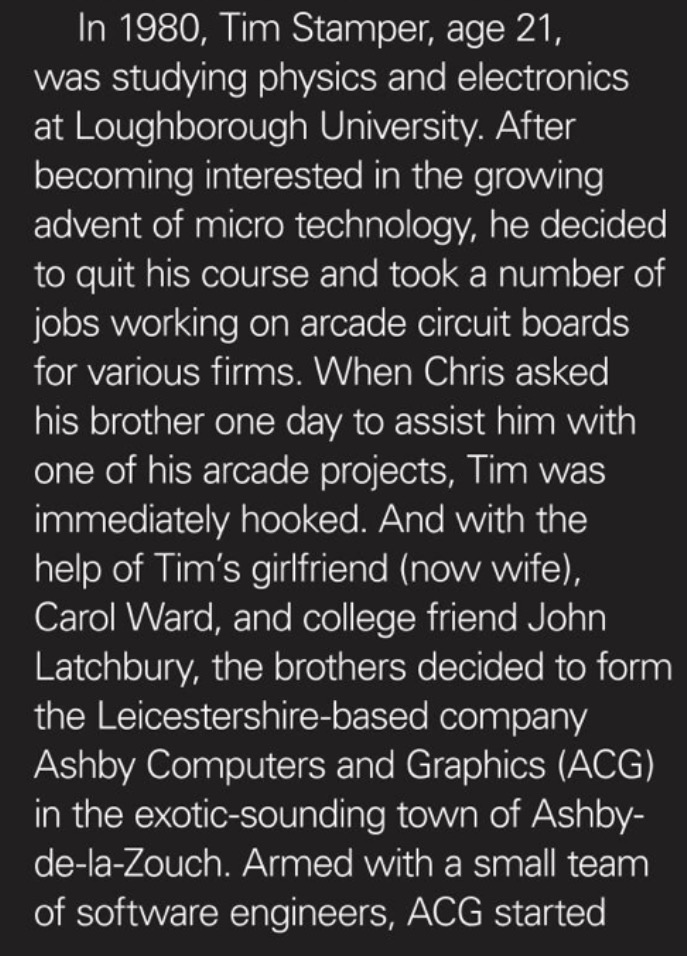 Phantoms II, another mono affair from 1981, might also just sneak in before they left that year to form ACG and work on Blue Print and Dingo. It's a Space Invaders hack notable only for the fact that if you hold down the fire button your spaceship launches into the air, almost as if it was attached to some sort of... jet pack.

(The attract sequence also sees a large fighter jet scroll onto the screen in a manner rather reminiscent of that in Saturn.)

So where are we up to? We have either official confirmation or at least credible cases for the following:

That's 10, and Commodore User might have been slightly over-egging their part in The Pit to make it 11. And if we add Gyruss, which CU explicitly credits them with (rightly or wrongly), that'd be the 12.

Is that - finally - the full history of the Speccy's most enigmatic developers? We may never know. But at least it gives us the chance to look at a few obscure old games with fresh eyes, eh?
9 x
Top

Sleuthing is fun. I did some searching through the roms:

Just for completeness - of course it's also clear onscreen.

Wizz Quiz
Nothing of note.

which is probably nothing, really.

aka Enigma II; and if you play that version in MAME you get colour, too. These names are also at arcade-history.com, which I think is the source for the history.dat file that works with MAME frontends.

Well that's not mincing words. Though just to keep the dream alive, a comment by 'sho' at The Digital Antiquarian links to an article in Home Computing Weekly and notes the picture of a storyboard which indeed has an "uncanny resemblance" to Gyruss.
6 x
Top

I raised the subject on WoS a few years back and there was a little discussion of it there:

Apparently they also made something called 'Zog', which I can't find any references to other than one from Leigh Loveday.


Rev_Stuart_Campbell wrote: ↑
Fri Nov 15, 2019 12:22 am
(Note, btw, at 3m in that video, some short bursts of some music you may have heard in another arcade game. Buggered if I can put my finger on it at this exact moment.)

which is probably nothing, really.

Apparently there are two developer credits, interleaved, in the main CPU at 0x47D8:

You can probably see that if you rearrange those groupings you found, (a few final chars appear to be missing for John Lathbury...)

Interesting stuff. I didn't realise they were so much involved in arcade machines.
That explains the arcade quality of early Ultimate games like Psst, Cookie and Jetpac.

And they were always a bit mysterious people, not willing to talk much about their work.
0 x
Top

Indeed. And still. Tim Stamper appeared on Twitter for just a few months back in 2015, then mysteriously went quiet. It was an interesting few months, though:

I've updated this with the ROM info (credited) into a proper blog post so that everything's in one place that people can easily find:

Another clue perhaps - I just fired up MAME and ran the Grasspin ROM and it runs off the blueprnt.cpp driver, which means the hardware will have been almost, if not completely. identical to Blueprint's. Of course, that doesn't necessarily mean they had the same authors (though @MrCyan 's stirling work above shows this is true in this case), but is another data point to consider for the other titles, I I haven't looked at any of them though.
0 x
Top
Post Reply
19 posts