According to this page about Mandarin the artwork is by Mike Ellis. I think Godfrey Dowson and Neil Strudwick, currently listed as inlay/poster artists, are actually the in-game graphic artists.

Hi @Rorthron. @StooB pointed out that this is already covered here. We are working through updates as quickly as possible and as time allows.

No problem. It hadn't been mentioned in these threads, and I was unaware it had been discussed somewhere else in the forum.
0 x
Top


Also Road Frog is credited to Bob Wakelin. The "original artwork" in the file downloads is the for the later Oric release by Ocean, not the Spectrum Games release. This version is the one in shown the Crash article, and in the History of Ocean Book.

Working alongside Steve in those early days was artist, Bob Wakelin. Hired by Ocean in 1983 together with illustrator, Blair, Bob and Blair would be responsible for Ocean's debuting games, Moon Alert and Gilligan’s Gold.

Bob is quoted in the History of Ocean book:

Ocean’s founders, keenly aware of the importance of marketing and the quality of artwork they required, signed up Blair-Wakelin on the spot, although the partnership fell apart rapidly. ‘Moon Alert [1984] was the first thing I did in conjunction with Blair and then Gilligan’s Gold."

the book then contradicts this by saying:

"But Bob kept his hand in with the odd illustration job and after two years started working with Blair, through whom he became involved with Ocean – or, as it was then, Spectrum Games."

The evidence isn't conclusive, but it doesn't look to me that these were produced by the same artist: 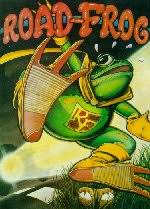 They're not all missing credits. Hunchback, for example, is already credited to Bob Wakelin.
0 x
Top

Rorthron wrote: ↑
Tue Aug 04, 2020 8:45 am
They're not all missing credits. Hunchback, for example, is already credited to Bob Wakelin.

It should say Hunchback The Adventure - that's where the link goes.
0 x
Top

ESB, who is this? 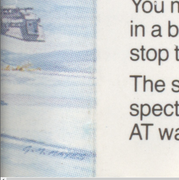 It came up in the first Cover Artists thread, but we don't have an answer:

There is a signature in the bottom right. It is hard to read, but might be Josh Hayes, or perhaps Jim Hayes.

BTW this is the signature:

I did some investigation on that one, including reverse image search, but nothing concrete found. That baffles me is the Star Wars context and quality of the work, makes you think is going to be easy to find the author.
0 x
Top

Deus ex Machina
Per instructions:
"Cover photograph of Nina von Palisanderholz. Additional artwork by Robin Grenville Evans."
I guess Evans modified the photo for the cover. I think he should get an "additional art" credit only.

Digger Dan : https://spectrumcomputing.co.uk/entry/1 ... Digger_Dan is also missing a Bob Wakelin credit. Although it's missing his name, it's clearly one of his.

There's also a chance that he did Caterpilla: https://spectrumcomputing.co.uk/entry/8 ... Caterpilla as again it's very much a Bob Wakelin styled cover, although it's for Spectrum Games and does go against the story of him working only for Ocean.
0 x
Top
Post Reply
45 posts