Yep, moved the leg down a pixel and shortened the calf to avoid the corner of the character square with cyan paper. Not perfect but I think it's passable.

llewelyn wrote: ↑
Thu Aug 15, 2019 10:39 pm
I wondered why she had a crucifix sticking out of her head! Those are ears? A bit linear sort of straight, hard edged for rabbits ears, aren't they? But then I don't know the game so perhaps they are meant to be like wood. Colour is a bit dark too.

I thought it was clear it's some sort of technical headband with sensor antennae? (I got the idea of angling one down from the two aerials on a Wi-Fi card). They're the latest in Battle Update Navigation Equipment - BUN-E ears.

(I've thickened up the line below where they cross, to maybe make it a bit clearer they're not joined. That's right on the edge of what's possible with the attributes though as there are four colours vying for that space!)
Last edited by Joefish on Thu Aug 15, 2019 11:54 pm, edited 3 times in total.
1 x
Joefish

I did try and make the Hoon (the Pokémon-thing) bigger, based on a teddy-bear, and covering more attribute squares. But I think it spoils the overall look if it's too big. And it pushes the character further to the right, meaning less room for a title. 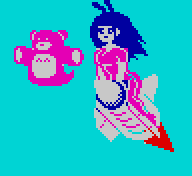 I beg your pardon. Actually they're jolly good now I know what they are.

Don't get mad Joefish I'm just having a leg pull is all. Its better than I could have managed considering the Spectrums graphical limitations.

I think your artwork is bloody excellent, especially the rocket blasting off, the Fairlight and the clifftop scene is my favourite because of the composition and colour.

I am an artist too so those are genuine appreciation.
0 x
Top

Um - those others weren't mine!

And anyway, they're rockets! This isn't Parodius you know!
Earthworm Jim never had to suffer this kind of bawdy insinuation!

Sorry about the illegal pixels, should've double checked before posting. Your modifications are spot on though, looks really good to me.

The big Hoon looks good but I think the size of the smaller one works a bit better. Also like its new eye-spacing and the use of white for its face features.
0 x
Sam Mallard - ALIEN(BUGFIX) - Demoscene - Dangan GB
Top

I'm not sure when I decided on the word 'Hoon' - I think I just thought it sounded a ridiculous word as the surname of the utterly and ridiculously incompetent MP of the same name. I suppose if I needed another one now it'd be a 'Grayling'!

I do love though how Doctor Who manage to come up with simple yet original one or two-syllable names for the aliens. You'd think all such possible short words would be used up by now, kind of like three-letter domain names!

I think something @llewelyn said about the Hoon is right - the bigger one looks like she's chasing it; the smaller one looks like it's trailing just off her shoulder, so it looks more like a pet or a familiar.

Thinking about it, the whole pin-up girls on bombs thing for bomber squadrons is just an update of witches flying on broomsticks. (I did like the gag in Hocus Pocus, where there's only one broom so the other two witches fly away on a mop and a Hoover). Though the whole broomstick thing isn't entirely innocuous...

Though it does bring us back to Kiki's Delivery Service...

llewelyn wrote: ↑
Fri Aug 16, 2019 1:05 am
Don't get mad Joefish I'm just having a leg pull is all. Its better than I could have managed considering the Spectrums graphical limitations.

No worries. Honestly, the more engagement and discussion there is over this game, the more likely I might actually finish it one day!

OK, I've redrawn the titles in the new space. See what you think...

That leaves the clouds to outline, and I think I need some more grass detailing and texturing on the green area. I can't seem to do much with the blades of grass I have done already - any sort of line or attempt at stippling just makes them look worse.
1 x
Joefish

Much much better now